Aeterna Noctis – Always Look At The Bright Side REVIEW – Aeterna Noctis is an average game: this thought was my idea for a good day and a half. It’s harder to explain than trying to figure out a program from a monoscope (there isn’t one; otherwise, it wouldn’t be a monoscope). That’s not to say that the product is terrible, but I can’t call Aeterna Noctis particularly memorable for that reason, which is probably worth a try between two Christmas meals.

The mysteries of humanity; I’d include the temperature/perseverance of my seven-and-a-half-year-old PC. 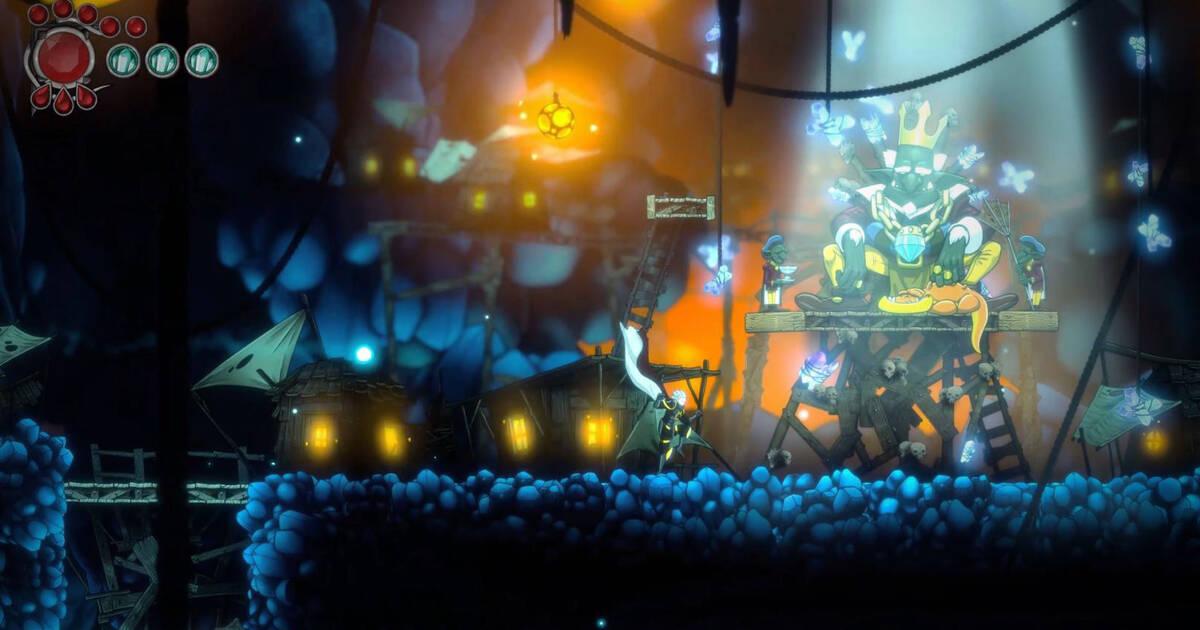 But let’s get to the point: this game draws from the Souls games and… Metroid-style, side-scrolling, exploration-based titles (I don’t like the shorter term…). Aeternum Game Studio S.L.’s product can be described as stylish, and not just because it doesn’t deny that behind the dark fantasy and anime cloak lies Konami’s recently severely neglected franchise Castlevania. (It also applies to Silent Hill; the second part was also mind-blowing in terms of psychological analysis.) Essentially, the story is an endless war between the Queen of Light and the King of Darkness. Both have tried to tip the cosmic balance in their favour, but the creator of Aeterna, Chaos, has cast an immortal curse on them because that is how the balance is kept. It, in turn, made the world beneath them suffer, and especially in the case of our king, the grinding and agony are emphasized.

And it is the king who is at the helm in Aeterna Noctis (in other words, he is the protagonist). But the game, unfortunately, follows a template, so yes, our abilities and powers will not be there after the intro. Slowly, over time, we will get stronger (it takes about 18-19 hours to play the game through, but it could be less), and the skill tree allows us to create a unique build, but there is a sense of superficiality here too. The first tier of upgrades is mainly designed for combat, so you’re more likely to be able to slip in critical damage, for example, or increase your attack power in general. Unfortunately, these will be necessary, as the idea of superficiality can be applied to combat. I would consider it slow, and in some cases, not precisely tilted in the player’s direction when a character with an axe attacks much faster than we do with our sword. This scenario will happen relatively often, which is why it will be noticeable even to a non-specialist. Of course, you can get used to it, but it’s little things like that that eventually add up to the score, rating, or who knows what after about 5100 characters. But if that were all that was distracting to an almost frustrating degree, then perhaps a more rounded score could be rewarded for a not so poor game in terms of visuals… 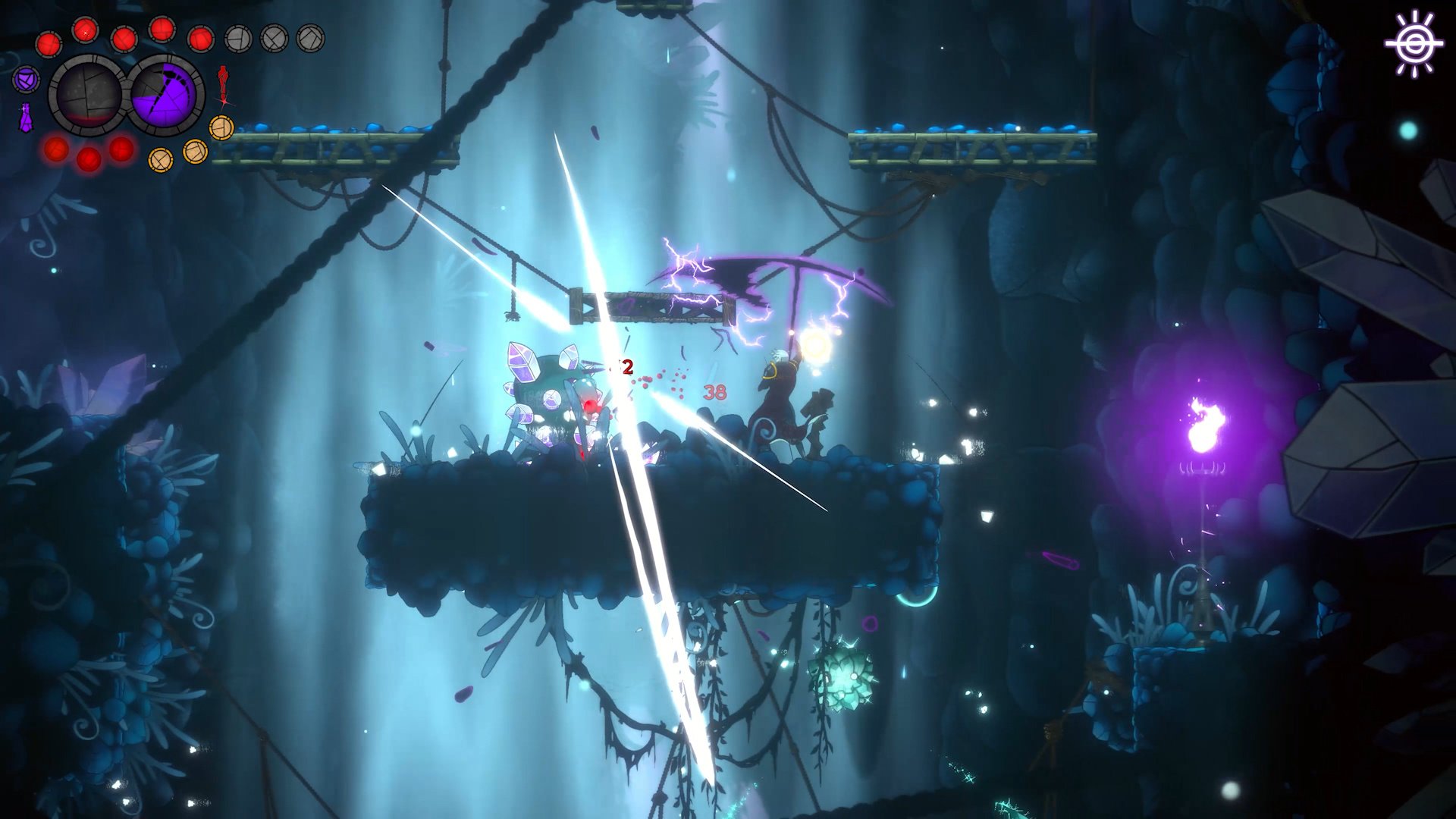 Another essential element of the style is the platforming. Well, I can’t sing its praises on that either. On the contrary, there will be some (?) moving obstacles. That’s fine. But they have bigger hitboxes. That’s a problem. There will often be smaller platforms with a considerable distance between them, which will also be noticeable. I wouldn’t say the platformer elements are precise. I don’t feel in complete control of the character in the air, and it doesn’t come across naturally where I can land at the end of my jump. But let’s get back to this hitbox thing. Why is this a problem? Well, the objects seem more significant than they look. The implication is that we will have little space and/or time to react and move appropriately. It doesn’t always work, so we’re going to die a few times because of it. And that’s… pretty much Souls style. Why? If we die, our potions, money, and items will be left behind, and our only chance to get them back.

If not, we can heal at the bonfires. Wow, the legacy of FromSoftware has reared its head. Okay, it’s a throne in this case, which is apt since we’re talking about a ruler, after all. Sitting on the throne (not a toilet, mind you…), you can upgrade your skills and teleport to other thrones your butt has already tried on, with a downside. Opponents won’t reappear in the area you’ve just left, but you can expect them to reappear in the surrounding regions. So, yes, the joys of respawning (?) will not be lost this time either, and it happens at least with a slight twist.

Nevertheless, Aeterna Noctis still finishes with a seven out of ten, as the flaws I just mentioned are not that serious, and the game has nothing to be ashamed of in terms of its artistic style. It, however, is what can be called an average game and nothing more (and it explains why I cannot rate it an eight out of ten). Yes, it got the job done, but the hand-drawn style, and perhaps the decent boss fights, may remain memorable. You can see what the inspiration was. So it’s not weak, and for fans of the… well, I’ll write it down here at the end, Metroidvania style, I recommend giving it a try. On console, though (PlayStation 5), it does seem to tend to crash, so that’s something to watch out for.

+ The art style
+ The story
+ Not that short

REVIEW - It's an average game: this thought was my idea for a good day and a half. It's harder to explain than trying to figure out a program from a monoscope (there isn't one; otherwise, it wouldn't be a monoscope). That's not to say that the product is terrible, but I can't call Aeterna Noctis particularly memorable for that reason, which is probably worth a try between two Christmas meals.

User Rating: Be the first one !
Spread the love
Tweet
Tagged Aeterna Noctismetroidvania