Reggie Fils-Aimé: Nintendo Has Not Left F-Zero Behind

Meanwhile, in the US, the Nintendo Switch has already outsold the PlayStation 4, despite the big N’s platform being on the market for three years less…

F-Zero Climax was the latest in the futuristic racing game series. It was released for the GBA in 2004, nine months after Reggie Fils-Aimé, later Nintendo of America’s president, joined the Japanese company. He’s since left Nintendo and is now on a press tour for his autobiography book; he’s just turned up at VentureBeat, where he said the company doesn’t have any innovative ideas to bring F-Zero back, but he thinks the big N is probably experimenting with a few concepts that could make a comeback.

“Why was F-Zero abandoned? The insight I would share is that, at least during my tenure, Nintendo developers were always experimenting with different gameplay styles, always thinking about where a unique experience could be applied back, either to an existing franchise or maybe creating a new franchise. I bet that somewhere in the Kyoto development centres, some developer is playing around with the idea that might be applied to F-Zero. It’s never a situation, at least in my experience, where the company makes a conscious decision not to continue supporting the X-Y-Z franchise. Historically, it hasn’t worked that way, not when I was there,” Fils-Aimé said.

Last year, F-Zero character and vehicle designer Takaya Imamura said that he always had an idea to revive the series. Still, without a big new idea, he would find it difficult. In 2012, Shigeru Miyamoto told Gamekult, a French website (after they polled that they want F-Zero to be brought back): “Since the first game on SNES there have been several instalments, but I don’t think the series has evolved much. I’m inquisitive and would like to ask these people: why F-Zero? What do you want that we haven’t done yet?”

According to the April report by the US NPD Group, the Nintendo Switch has already surpassed the PlayStation 4 in lifetime sales in the US, after both April and 2022 records were broken by the hybrid platform. In terms of dollar sales, the PlayStation 5 pulled in the month (the Switch won in terms of units), with the Xbox Series coming in second in both perspectives. According to NPD analyst Mat Piscatella, the Nintendo Switch is now the sixth best-selling console in its lifetime and fourth among desktop platforms behind the PlayStation 2, Xbox 360 and Wii. (The two handhelds are the DS and the Game Boy product lines.)

In terms of game sales, there were only two new games in the top 20 in April (LEGO Star Wars: The Skywalker Saga, which opened at number one and is already the second best-selling game of the year, plus is the sixth best-selling game of the last twelve months; the other is Nintendo Switch Sports, which started in fifth place). Elden Ring, the previous leader, slipped to second place, and Sony’s multiplatform baseball game MLB: The Show 22 moved up from fourth to third. Gran Turismo 7 dropped from second to ninth, and Kirby and the Forgotten Land slipped from third to fourth. 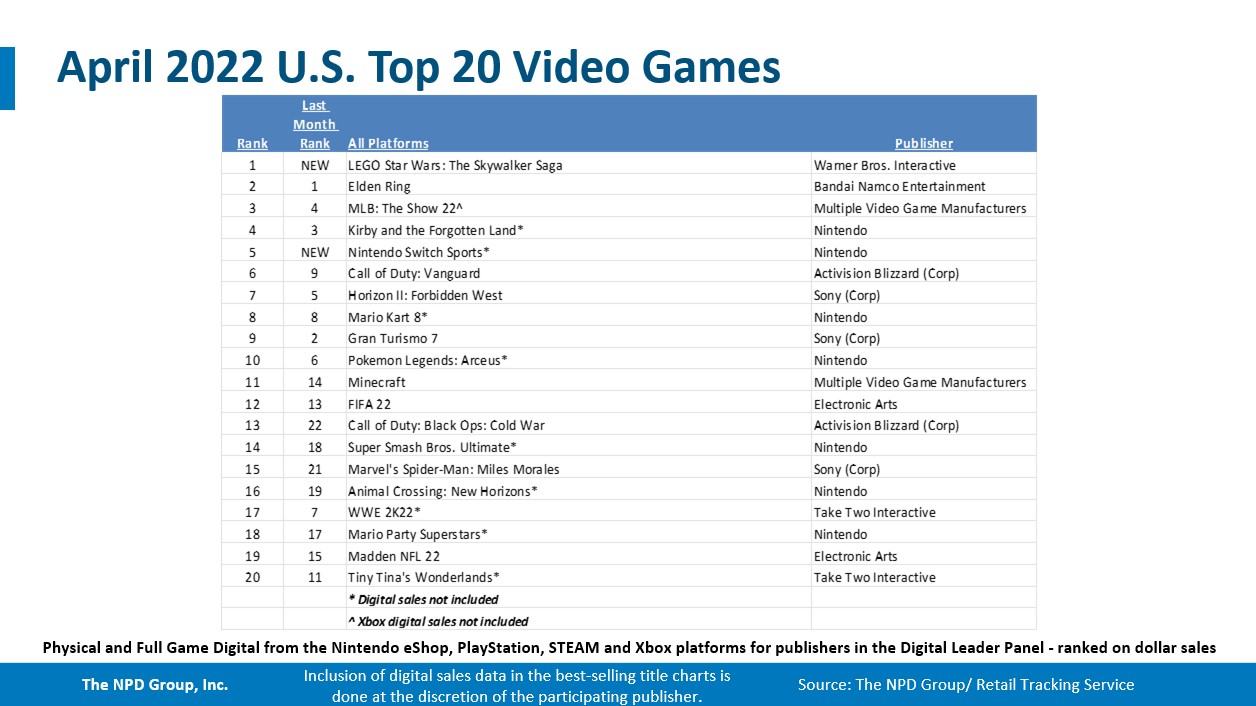