The Dwarves – If Only It Stayed As A Book REVIEW – Markus Heitz’ Die Zwerge originally was published in 2003. The English translation followed suit in July 2009, and King Art Games – a German developer team – took it, with Nordic Games (evolved into THQ Nordic) picking up publishing rights. If only this game never happened…

We’re talking about a real-time strategy – yes, we need to plan to switch between characters and using the special abilities. The game will teach you right in the early minutes to focus on continuous movement, cooldowns, and timing, or you’ll end up getting killed by the orcs in about five minutes. As it’s a strategy, controlling your folks might be familiar: you can also stop the game with Square and then point out destinations. Still, there are some problems here. The game’s main issues don’t lie within the audio or the plot – the devs could have screwed up Heitz’ book (in a sense, they did it with the gameplay, though), at least he put down the basics. The issues start with you ending up being forced into learning the harsh basics, making it an awful first impression.

If you control one character for too long, the others die in no time, resulting in a Game Over. You can’t concentrate on just one. Right, I’ll switch around, but I’m not sure if the skills can be predicted. You’ll never know which skill will be a viable option in most cases, and this event makes The Dwarves more like a lottery instead of a video game, going into unacceptable territories. 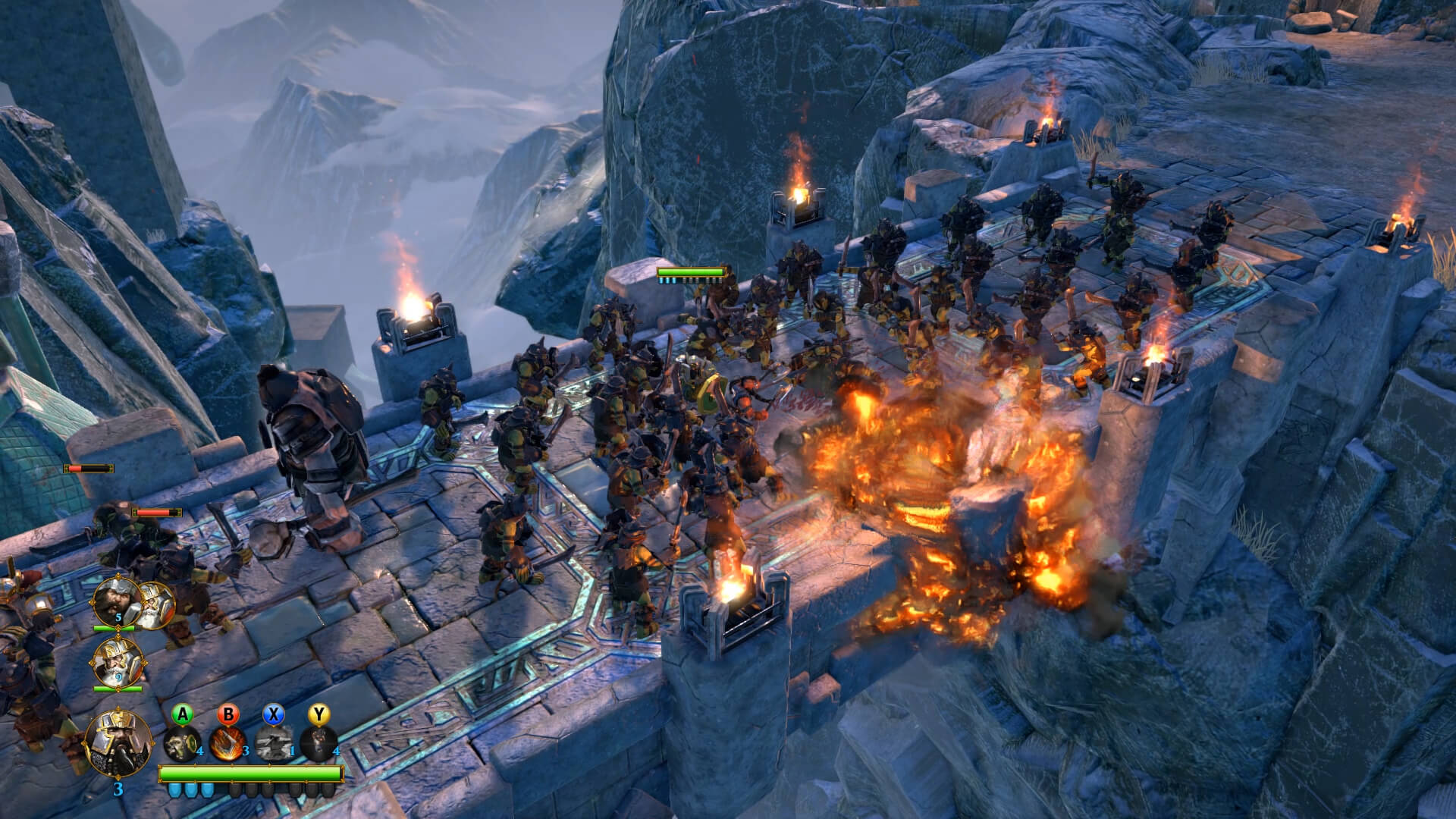 The movement itself has bugs, too: I ended up getting stuck in objects and geometry in multiple cases. Yay, let’s make the game harder! Also, I also suffered from getting stuck in some combat debris after killing a flock of enemies. I got stuck – seriously, why is this a problem in this game? Why not make the debris disappear? I was already considering uninstalling by this point, to be honest.

I didn’t even go into the game’s technical limitations! Let’s start with the frame rate: it is going all over the place, making the game mostly choppy. Sure, a strategy game can be hard on consoles, but let’s add some Russian Roulette to The Dwarves by the game freezing here and there! There’s nothing better than finally achieving some progress, only to be losing everything because your console freezes – no further comment on that. The gameplay and the graphics are mostly on the floor, but still, The Dwarves has some positives. 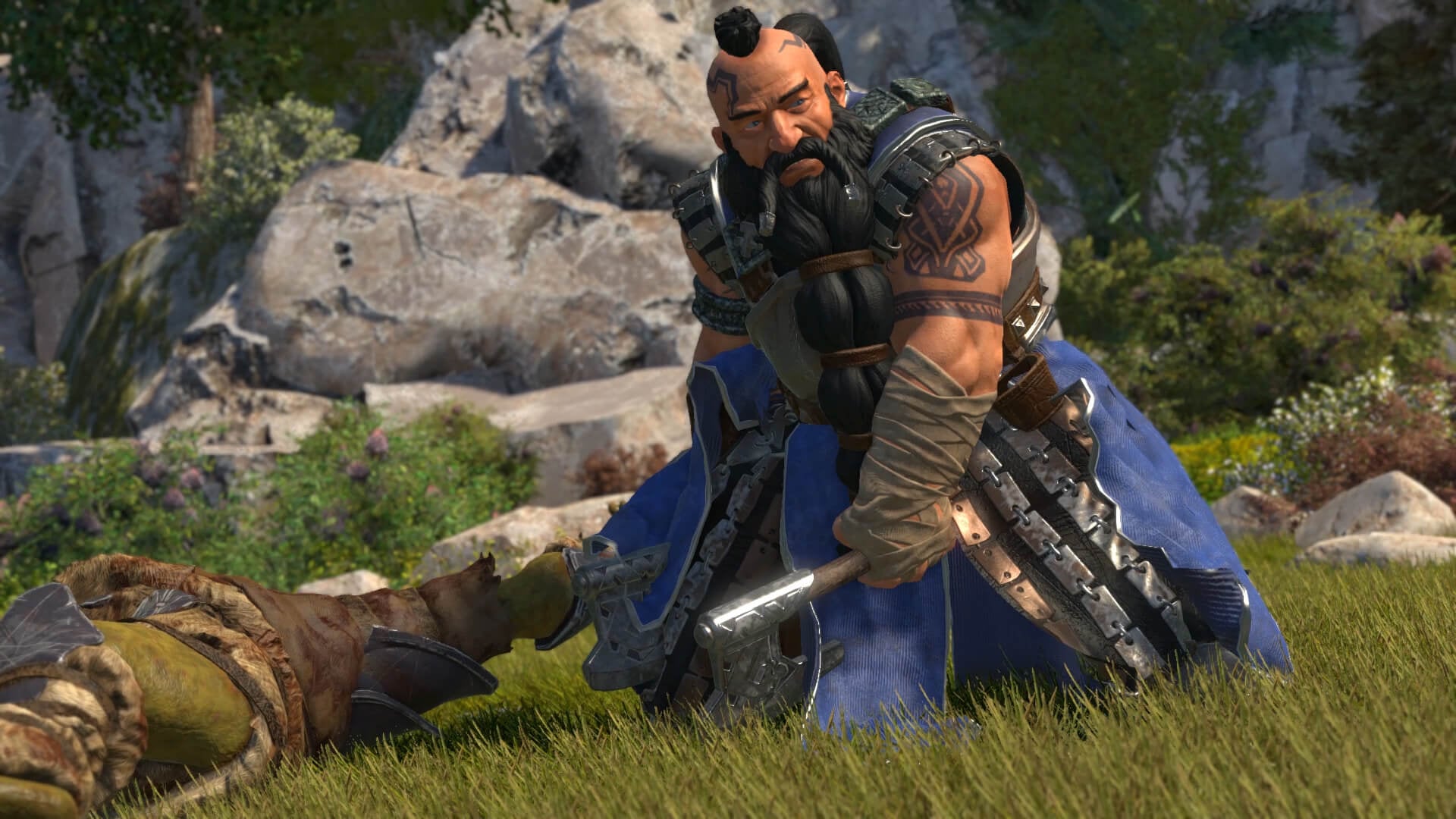 At least it looks nice…

Despite the frame rate’s problems, the game’s presentation is worth a mention. The Dwarves looks quite sympathetic, and add the previously mentioned great audio and plot – you’d easily have potential here. If the developers made an animated CGI movie and not a game, I swear I’d go out and buy a copy right now: the artistic style is spot on.

The unbalanced difficulty is another thing I need to point out. There’s no natural difficulty curve here – it’s replaced by spikes all over the place, which affects the gameplay and the ambiance. The developers have screwed this up, and – subjectively speaking – making the game semi-difficult right from the get go is not easy, and if you mess up, you will be forced to restart the mission, which is mostly consisting of kill X enemies. Woohoo, so exciting.

The game is mostly weak in where it should shine: in the gameplay. Even the camera can be an annoyance, so we have a tactical RPG with a good story and audiovisuals (sans the frame rate), but the gameplay, the difficulty, and the overall monotone setup make my judgment harsh, and I only give it a six because of the good essentials. Buying this game is not recommended, even if you know the book. It’s just limited in every possible thing.

I hope THQ Nordic gets their act together – they need better games to publish than The Dwarves to achieve their goal of becoming a solid mid-tier publisher. The Dwarves is close to being a garbage title, and without Heitz’s story, it’d be all graphics and no gameplay. What a damn shame…

– The gameplay
– The camera
– and even the difficulty spikes cause trouble, and I ran out of spaces for negatives

REVIEW - Markus Heitz' Die Zwerge originally was published in 2003. The English translation followed suit in July 2009, and King Art Games - a German developer team - took it, with Nordic Games (evolved into THQ Nordic) picking up publishing rights. If only this game never happened...   We're talking about a real-time strategy - yes, we need to plan to switch between characters and using the special abilities. The game will teach you right in the early minutes to focus on continuous movement, cooldowns, and timing, or you'll end up getting killed by the orcs in about five…
The Dwarves – If Only It Stayed As A Book
The Dwarves – If Only It Stayed As A Book
V
I'd rather read the book.

I'd rather read the book.

User Rating: Be the first one !
Spread the love
Tweet
Tagged RPGTesztThe Dwarves