Activision Blizzard and Sledgehammer Games released a DLC with the aim to help the military veterans in need.

Last year, Call of Duty: Modern Warfare Remastered received the Endowment Brass Pack, which raised money for the Call of Duty Endowment. It was founded by the publisher’s CEO, Bobby Kotick, in 2009, and since then, the endowment has raised over 3.8 million dollars. Now, Call of Duty WWII has received the Fear Not Pack, which contains new uniforms, weapon camos, emblems, and calling cards. It costs five dollars, and you can purchase it on Steam or the game’s store. With the raised money, the endowment wishes to help 50000 veterans to find new jobs by 2019. 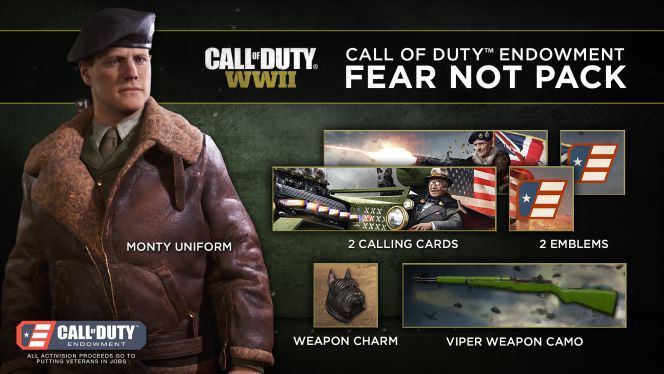 The idea is excellent, but we couldn’t access the link on Steam, as it seems to be region blocked, perhaps because the endowment was supporting American veterans only since its foundation. At least the publisher won’t just pocket all profits…