RETRO – „Deadly Romance” is an apt description to Mona and Sax: the wounded cop, and the deadly assassin, two people’s love that causes many deaths for the bad guys. This love story is not pink, but black as the night: the handkerchiefs here are used to clean the end of the bloody pistol, and roses are only put on the graves of the dead…

Those who start massacring people in New York City usually end up in the chair or a mental hospital. However, Max Payne was not only able to avoid those two fates, but was celebrated as a hero. Of course, for this to happen Alfred Woden had to intervene, and needed to clear Max from any hefty charges: He was only taking out the trash by killing gangsters and rogue government agents. Our hero while still alive is not too happy: he’s back to being a normal cop instead of handling DEA cases. However as we are playing Max Payne 2, our protagonist cannot survive so easily until retirement. Yep with Max another bloody massacre is afoot in New York again. As for our hero well even he gets weakened by all the big firefights. The game starts in medias res: Max is in the hospital with scars on his face, and a few bullet wounds. Not only is he suffering from physical wounds, but also mental ones, as this time he did kill his partner… 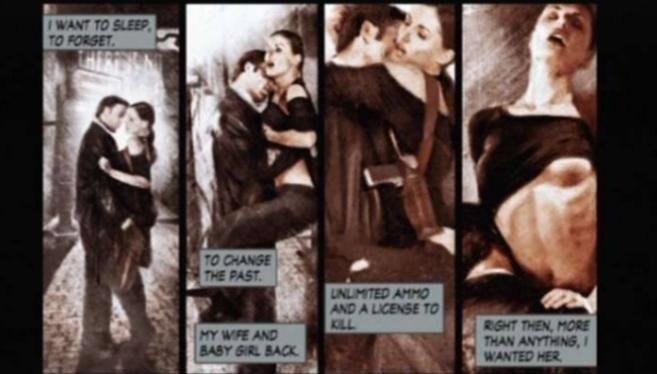 The method of story telling did not change too much, but those who were doubting that Lake could not write something original again: well they were wrong.While the deadly romance is from classical crime movies, but the motive is used heavily in a video game for the first time. Max’s lover is the beautiful Mona Sax, a real femme fatale, and assassin (á la Nikita), is a well-developed character. Best part is that not only we get to see Mona in the cutscenes

The story is once again told by Max Payne, who is voiced by James McCaffrey, but everyone else does a splendid job regarding voice acting. Not one actor phoned it in during the acting; we feel as if we are in a classical film noir. Those who did not play the first game ( load it in immediately), probably heard that Max Payne’s greatest ace in its sleeve is the „bullet time” feature. This allows the player to control Max in a slowed down environment in the game, and we can dodge bullets, and kill bad guys rather efficiently. Just like in Max Payne 1 we do not get crappy knock-off effects, but actually high-quality effects. Plus sometimes this is the only way to kill a high number of enemies, or to avoid them. Otherwise, we would be probably turned into swiss cheese.

We can fire with Max and Mona without the need to reload until the magazine is empty, or until the bullet time runs out. An interesting thing I noticed that while many games tried to mimic Max Payne’s feature, none of them were able to implement it in a fun way. While Max Payne 2 still contains the bullet time feature, the novelty of it is a bit lower, but this is probably the only game where we get to experience a John Woo or Tarantino style shootout in a videogame. The developers worked on the important characters physical details, and this can be seen especially for Max Payne and Mona Sax. Both characters have been modeled based on real life actors, and their faces are much more detailed compared to the previous digitalized version of Max Payne (who was Sam Lake writer of the story for both games). Although I would have loved Sam Lake to be back as the model for the character, but, at least, Max is not grinning all the time.

Max’s partner and lover, Mona Sax – as her name implies – is a sexy woman. While we rarely control her during the game, the Remedy guys fleshed her out as best as they could. Mona wears tight jeans, and sexy shirts that put Lara Croft to shame regarding sexiness.
The different industrial locations, docks, elegant villas and small hotels are authentic and photo-realistic, further adding to the feel of: „As if I were in a movie” atmosphere. The graphics engine looks great and luckily does not tax our consoles or PCs too much, yet the game can render everything in high quality. Unlike some other overhyped games that look great, but end up nearly killing our PC or console in the process, or some games do not look good as advertised. A lot of games these days use ragdoll physics, which basically tries to animate the fall of a dead body as realistic as possible. The developers here raised the level of this technology to new heights, by making the „living” characters react to individual shots. So in case a character gets shot in the shoulder, he’ll stagger back realistically. That’s not all: not only does every character has its physics, but the objects as well. All of the objects react differently when we shoot, or throw them, whether these objects are crates, barrels or anything else

When Max enters a room and shoots up the place nothing stays still in the room, and we can even knock over tables, furniture etc. When a few bullets hit the enemy, they can also knock down the objects. Regarding gameplay these realistic moments can also be used against the enemy, if a gangster is behind a door, we can slam the door against the enemy. Plus we can blow up barrels that explode later and kill off the enemies.

Max Payne 2’s action sequences are phenomenal, thanks to the physics, the graphics, and the updated bullet time. The story – while not as great as the works of Dashiell Hammett, or Raymond Chandler, or even the Godfather movies – we still got one of the best stories in video game history. Does the game contain a lot of new features? Hell yeah, it does! I also enjoyed the sections with Mona Sax, and the best part was when we got to control both characters in the same level but at different sections!

When we got to see Max blown away by an explosion, and then seeing the scene again from Mona’s perspective, I was in awe!
In the end an unfortunate event happened which is pretty rare: I pressed the „real time” button at 9 pm, and stood up from the game at six in the morning.

– Short
– By the time you enjoy it, the story is over…
– in a rather rushed way

RETRO - „Deadly Romance” is an apt description to Mona and Sax: the wounded cop, and the deadly assassin, two people’s love that causes many deaths for the bad guys. This love story is not pink, but black as the night: the handkerchiefs here are used to clean the end of the bloody pistol, and roses are only put on the graves of the dead…   Those who start massacring people in New York City usually end up in the chair or a mental hospital. However, Max Payne was not only able to avoid those two fates, but was celebrated…
Max Payne: The Fall of Max Payne – True Romance [RETRO-2003]
Max Payne: The Fall of Max Payne – True Romance [RETRO-2003]
Herpai Gergely (BadSector)
A stylish, original, and beautiful action game, such a game can be rarely found! Excellent, dark, and somber story. Great graphics and physics with action scenes that remind us of John Woo or Tarantino.

A stylish, original, and beautiful action game, such a game can be rarely found! Excellent, dark, and somber story. Great graphics and physics with action scenes that remind us of John Woo or Tarantino.