The Dark Pictures Anthology: Man of Medan – Not Until Dawn REVIEW – This time about Supermassive Games’ multiplatform title, The Dark Pictures Anthology: Man of Medan, which does not have the same level of quality that 2015’s Until Dawn, exclusive to PlayStation 4, reached before. This game is – simply put – a terrible start for the anthology, planned to have multiple games.

This game had a lot of attention going for it because the developers had to prove that Until Dawn wasn’t a one-off success from them. They failed, and this time, it’s not because it was an AAA game made by an indie team (looking at you, Ancestors), but instead, the whole concept flopped because of its subpar execution altogether…

Cause I’m on a ghost ship driving my heart / Home, come

Four people take a trip to the Southern Pacific Ocean to check out a crashed plane. This isn’t a warm start, even though important decisions start showing up at the beginning, and they will have an impact on the relationship between the characters. So, the beginning looks good, doesn’t it? Yeah, but then, Man of Medan (no, I’m not going to keep writing its full name down either…) thinks that now is the best time to quickly switch over to an origin story of about an abandoned ship, which will surface later in the plot. Dear Supermassive, it’s not a Turkish soap opera in the afternoon hours. This is not the right way to build the pace of your plot, and this whole pacing issue will remain for the rest of the game, sadly. It’s an unbelievable idea, and I’m willing to admit that Man of Medan gets a point on the 1-10 scale docked right here. Another one gets taken for almost entirely completing a checklist of the horror clichés. I understand, you need something to have the supernatural elements, but don’t do it in a way that we have seen used by countless other games. Alex and Brad (the brothers), as well as Conrad and Julia, together with Fliss, the captain of the ship called Duke of Milan if I remember correctly, quickly get into problems, which isn’t helped by our dear captain being unable to think outside the box. I usually don’t give a damn about rules (as I tend to work in creative things, and they require to have distinct and unique approaches to solutions…), and with this, I got a little, just a tiny little bit irritated. There’s also one more character, the Curator, who sometimes shows up to either give you some advice or to critique your decisions. (There’s nothing worse than people who only criticize you. Get out of here with that, will you?)

Luckily, the dialogues are pretty solid (and here, I’d like to add that if you play with someone else, you will see unique scenes and angles not seen in solo runs – I have no experience in this myself; it pushes replayability though… and if you play with a group, pick the Movie Night mode for that where people take turns to control their respective character), and your decisions do have weight in Man of Medan. If you know Man of Medan, you know what to expect here. The HUD is also pleasant, I liked how it looks – well done! However, the execution becomes an issue once again: the characters’ intonation and tone at a few points felt outright TERRIBLE! (I’d bring up an example here: in late 2012, in Crash Time 5, my character sat in a car and didn’t say „I can hear a big engine coming!”, but instead, said this in an enforced way: „I can hear a BIIIIG ENGIIIIINE COOOOMING!” – same deal here. To a small extent, Until Dawn had a similar issue.) 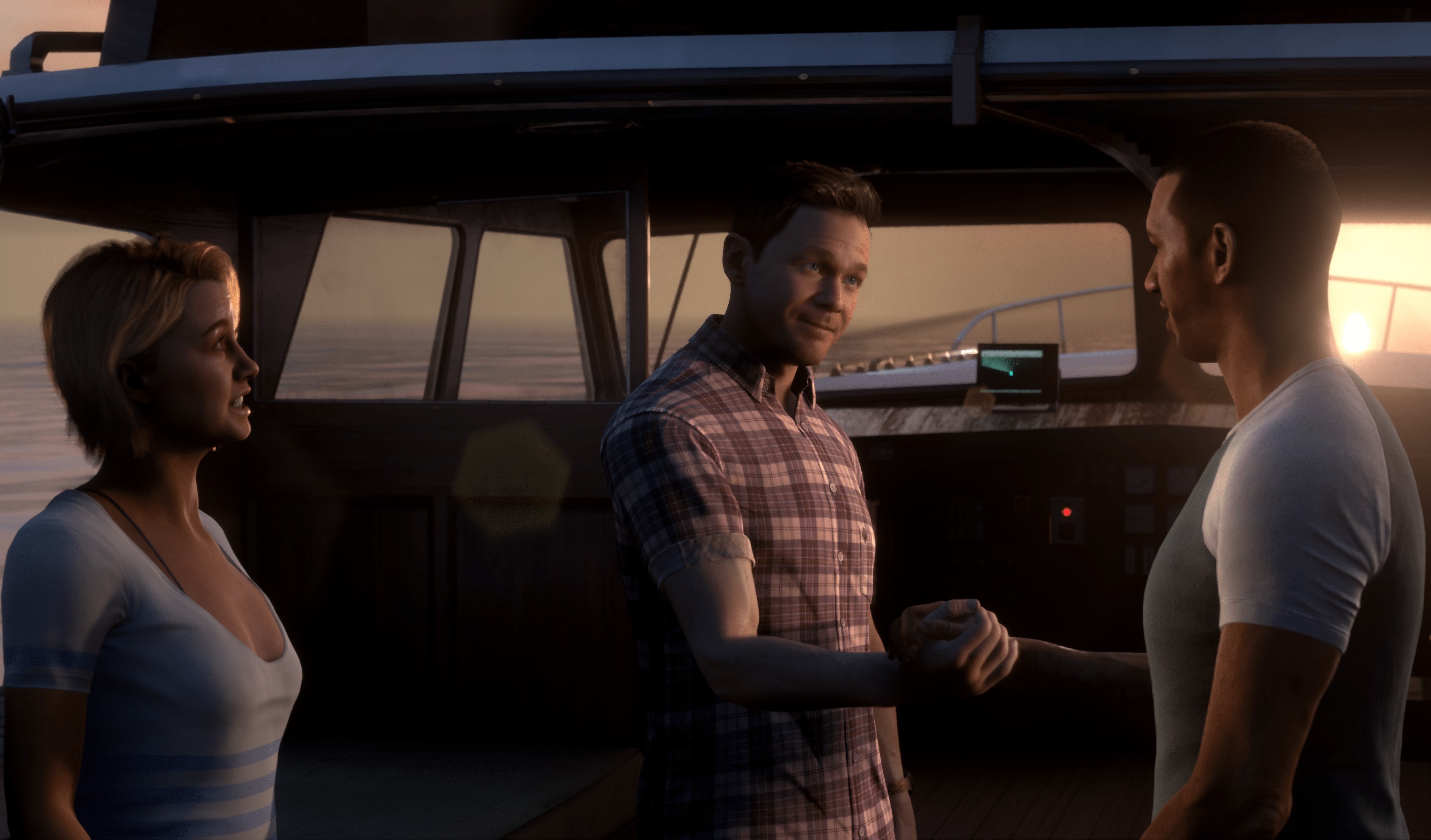 Oh, but aside from the questionable intonation, the animations also feel crappy here and there. Stiff? Check. Did you have no budget? The characters’ faces, now that’s another problem. Did you have no budget? You can combine these with the terrible intonation, and you can now throw the ambience into the trash bin, along with the story for being nothing more than a slasher plot, complete with the oh-so-unexpected twist that wasn’t a twist at all.

It’ll make you yawn. One more thing that I noticed was that several scenes happened to have characters randomly break into a dialogue for no real reason, which just impacts the pacing of the storyline altogether. It’s a yoke. Yes, typoed intentionally.

Out in the bay, I need aligned a new shiner / Rat race

So The Dark Pictures Anthology: Man of Medan can go home with a 6 out of 10. For me, personally, it was a 5, but in multiplayer, it gets that point back. The story, the usual horror elements and jump scares, the audiovisual flaws (despite the environment looking solid…), the story pacing – all these points are why the game slid away from an 8 out of 10, which it should deserve, really. But the sequel is already in development, and sequels tend to improve over the first product. I hope it is the case here, too. It’s a weak start, and I only recommend this game for half price. I hope Supermassive Games gets their act together for the next game (which I’m pretty sure will launch in 2020) because they have the potential to succeed. Isn’t this a rushed game?