Cyberpunk 2077 Will Not Be Entirely In First-Person! CD Projekt RED has changed plans: after showing us a fifteen-minute gameplay video from Cyberpunk 2077 (which we discussed a few days ago), they changed camera angles.

In short, Cyberpunk 2077 will be in a first-person perspective (even the sexual scenes), so the Polish developer team is making an FPP ARPG (first-person perspective action-RPG). It seemed that way for a day or so that even the cutscenes will all be in that perspective instead of a third-person one. CD Projekt RED had to respond to the situation, which is what Marcin Momot, the team’s community lead, has done on Twitter:

„Achieving full immersion in a first-person perspective game is extremely important and the decision made by the team to go 100% first person in Cyberpunk 2077 is something that will benefit it greatly from gameplay and storytelling perspectives. That said, players will still be able to see their characters in the inventory screen, during driving sequences, in mirrors and, very occasionally, in some of the cutscenes.” Momot said.

One response to it has a different view: „Why waste resources on having a character creator if it will result in something so underutilised? If it is just menus and extreme zoomed out driving why even have a player character model outside of the first-person perspective? I’m a lot less interested in the game now – seeing a character I’ve built out in the world makes me more likely to connect with them and removing that almost entirely means my V might as well be a mannequin. I’m sure the game will be good, just not as great as it could’ve been,” a disappointed fan says.

It’s going to be interesting to see how CD Projekt RED progresses with development, or if they end up swapping back the cutscenes to a third-person angle. They probably won’t. Cyberpunk 2077 is out on April 16 on PlayStation 4, Xbox One, and PC. 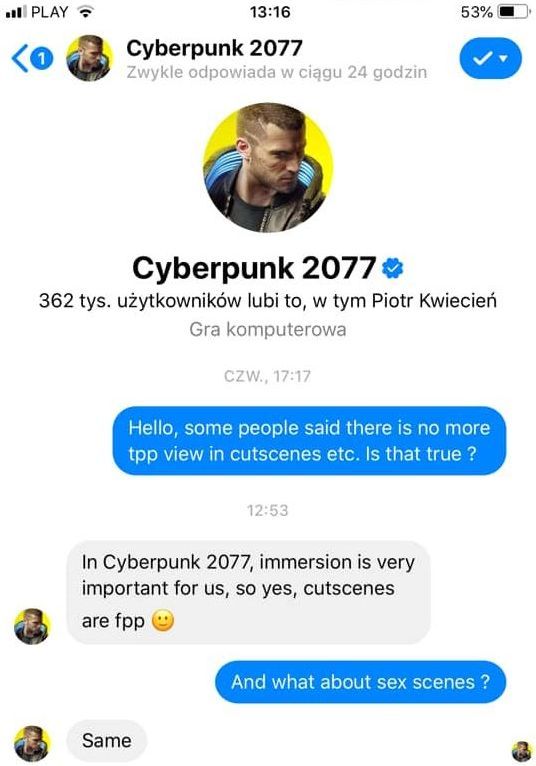