The Outer Worlds – Freedom in the Stars 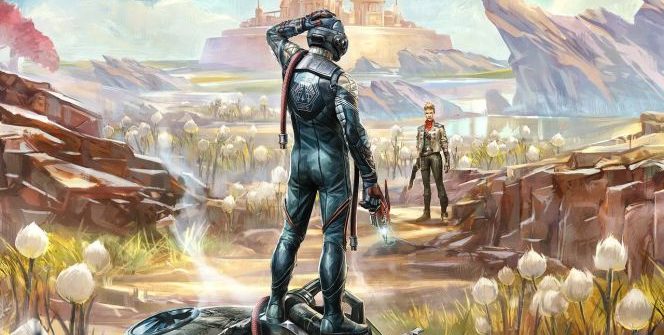 REVIEW – Obsidian Entertainment is once again back to deliver us an RPG experience that has not been made in a long time. After a short detour with their licenced South Park game, the developers created a brand new original IP set in the far reaches of space. Where every decision will shape the fate of the Halcyon colony, and its inhabitants. There’s speech check, there’s lockpicking, intimidation, shooting, multiple choices, and lots of gunfights if the player wants to deal with conflicts that way.

With a wide range of cast, planets, and moral quandaries the game seems to be shaping up to be a replacement for those who are getting bored of waiting for the next Bethesda title.
Let us see if The Outer Worlds leave a lasting impression, or if we should just choose to stop playing. Work on the colony!

The game is set on the Halcyon colony, which has been under the control of multiple big corporations that have formed an alliance through an initiative called The Board. Halycon runs on hyper-capitalism where the corporations own most of the people, most of the land, and towns. The player character is awakened from hibernation by a rogue scientist named Dr Phineas Wells, who tasks the player in helping him unfreezing the rest of the colonists. Whether the player actually does that though is up to their decisions. Since once the good doctor drops you down to Terra 2’s Edgewater colony town, the player is let loose.

There are a few things to set up before running around the colony either saving or damning everyone. The player can create their own custom character in terms of looks, and also will have to determine their skills, strengths, and weaknesses. You can divide a set of points to Strength, Dexterity, Intelligence, Perception, Charm, and Temperament. You can also reduce certain attributes to gain more points during your character creation phase, so you might have a really dumb character but is super strong. Alternatively have a super-smart character, who is really weak in terms of health regeneration and combat. The choice is up to the player, and I rarely felt that there is a wrong answer in terms of how a character is initially built.

The Outer Worlds has a gripping tale of espionage, thrills, adventure, and lots of decisions to make. We can even get companions aboard on to our little ship called The Unreliable, and the total number for them is six, all with different backgrounds, motivations, and even companion quest lines. There are multiple factions that can either fear us, or love us depending on how we interact with them, and how we resolve their quests.

There is no right or wrong answer for a quest, it all depends on the player’s morality, and sometimes certain endings can have additional branching paths. There is also no Paragon or Renegade answers or actions, and reputation is only for a set number of factions. Depending on who you support you can get additional discounts in shops or better items from certain vendors. Consequently, if you go to a faction vendor that hates you, they will charge you more for items.

There are multiple endings, and it all depends on how the player acts throughout its time. Mainlining the story will roughly take 10 hours, but if you want to experience everything that can take up to 25-30 hours. So for those who do not like long bloated adventures, The Outer Worlds is perfect. A gun, a lockpick, and a keycard

The game allows the player to approach situations in a variety of ways, with multiple outcomes, and these outcomes are not your usual black and white resolutions. You can most of the times slaughter your way through a secret corporate base, but if you have high enough tech skills, and personality skills you will be able to talk and hack your way through the building without firing a shot.

Some unique encounters can be experienced if the player takes the time to talk to everyone, and get to know the locations. However, if you just want to shoot some big aliens or evil corporate personnel you can do that. The companions are not just there for their quest lines but provide bonuses to our skill tree. So Vicar Max (Ex-Con turned Preacher) gives you extra points to hacking, or Parvati gives you more points to engineering.

Gear also can be modded, and altered to suit us better for our adventures. Certain gears give +5 for tech skills, others give +5 for medical skills, and so on. Weapons and armour can be moded at the Workbench. The player will need to have an adequate amount of armour or weapon parts, depending on which action they wish to do.

So while the game does give you customization options for armour and weapons, the weapon and armour variety is not great. They pretty much almost all of them look a bit too samey, and for most of the campaign that is all you get. Even the weapons are generic, and while there are a few Special weapons with special skins it is too little to count. You have your shotguns, pistols, machine guns, plasma rifle, plasma carabine, and grenade launchers. Furthermore, these weapons can have different damage types modded to them. So you can have two shotguns, one with shock damage, the other with poison damage. Also weapons and armours degrade so occasionally the player will need to repair them.

There is also a Tactical Time Dilation feature which the player can use to slow down time, get out tough situations, and analyze the enemy. Except sadly the combat is not that difficult, and there are only a few situations where this is actually needed to be used. There are a couple of difficulty modes, Easy, Normal, Hard, and Supernova (with this having extra survival elements such as sleeping/eating and drinking). The AI is dumb as a rock though so most of the times combat are easy, although in certain cases if you are playing on Supernova you’ll need to look after your AI buddies as sadly they are also not the brightest bunch.

So while the game allows for customization and tries to provide deep gameplay options, it falters in a few places mostly due to the AI, and the lack of variety in weapons/armour. Also, there are no side activities for the player to experience as relaxation, like space darts, or space poker. Plus if some people were expecting Bethesda style interaction with the environment well sadly that is not happening. It is still a fun game to play, but some of the budget limitations are showing in the gameplay. The Outer Worlds runs on the Unreal Engine 4, and it looks fine on the Xbox One X, it is nothing spectacular, and gets the job done. While the skyboxes are beautiful to look out, the building textures and layouts start to repeat themselves a bit near the end. Effects are nice looks especially the giant balls of plasma, and there is a bit of dismemberment, and lots of blood when a critical hit is made. Characters look good, and even the non-important NPCs are superb looking.

So while the environment is not the best looking, it does have its variety, as we go from backwater colony town to secret moon bases, to a city full of rich people, and all of this is presented in diverse ways.

Music and audio though is quality work, and the voice acting for the important NPCS is great. The combat music is especially great to listen to, but the ambient music is also superb. The non-important NPCs are fine and sound okay if a bit too repetitive at times. While there is a lot of options and dialogue trees for most characters, the generic NPCs are just there to stand around and say a sentence or two.

In the end, The Outer Worlds looks good, but hopefully, the sequel looks even better.

Travel of a lifetime

The Outer Worlds is a fun new experience, with many old familiarities that will be loved by fans of the old Fallout games, and those want a more nuanced experience. Still there are some budget issues with the game, but hopefully, the sequel will be funded better with the help of Microsoft. If you want a trip of a lifetime, go and play The Outer Worlds, it is not perfect, but it provides an experience like no other.

– Graphics could look better
– No side activities
– Too easy

REVIEW – Obsidian Entertainment is once again back to deliver us an RPG experience that has not been made in a long time. After a short detour with their licenced South Park game, the developers created a brand new original IP set in the far reaches of space. Where every decision will shape the fate of the Halcyon colony, and its inhabitants. There’s speech check, there’s lockpicking, intimidation, shooting, multiple choices, and lots of gunfights if the player wants to deal with conflicts that way.   With a wide range of cast, planets, and moral quandaries the game seems to…
The Outer Worlds – Freedom in the Stars
The Outer Worlds – Freedom in the Stars
Dante
A fun new IP with interesting RPG mechanics that can only get better with a sequel

User Rating: Be the first one !
Spread the love
Tweet
Tagged ObsidianPCPlayStation 4The Outer Worlds REVIEWXbox One