REVIEW – It’s a decent indie game that, going by the title above, can be interpreted in multiple ways, but this time, the roles have been revered, and perhaps this is why the game sold 200K copies in one week.

It alone sounds interesting. So it’s time to grab a bite. Both figuratively and literally. 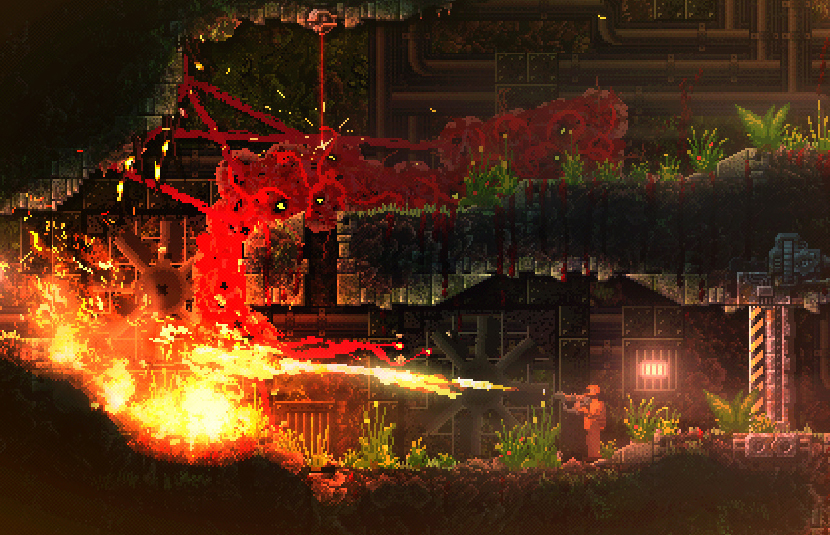 In Carrion, which continues to remind me of a 2000 Italodance song canned Carillon by Magic Box, has us as the monster with one, two, or god knows how many stomachs, which happen to be empty, so you will have to keep eating to survive. I seem to notice a bit of continuity here, as this time, I have to control an alien once again (where Destroy All Humans!’ predecessor was another remake published by THQ Nordic…), and unfortunately, the story here is such a basic thing that it could very well be the weakest part of the game altogether. You eat, you escape, and you have some flashback scenes with people in some hazmat suits, as well as fatcat bigwigs that continue to jolt down some notes in the process. This does not make our red character well-developed story-wise, and let us also not forget that there is a lack of dialogue, which means you have to keep a close eye on figuring out what happened in this underground secret laboratory.

You must use your tentacles to stick to essentially everything, which makes traversing the area exciting, especially with the physics that aren’t undercooked either. The combat consists of grabbing all the humans and then promptly lifting them to one of your many mouths. Initially, it will NOT be an easy task. You also tear the doors down with these tentacles, and it has a bit of relaxing sight to it happening and to see everything and everyone getting tentacle-raped. The passive boxes are in these containment units, and there will also be traps and defensive moves, including temporal invisibility, which will balance out the situation versus the weaponed enemies. The alien character can be divided to three portions, and you will need to use some strategy to get it all used, as the puzzles might need some time to solve, and thus, there will be a race against the clock here and there, which could make the whatthefletterworddoIdoknow factor exciting, as I don’t think it’s necessarily clean when it comes to showing you where you need to go next. Also, the enemies require different strategy based on their type. Still, I believe the gameplay is mostly entertaining, but no factor would keep the game installed for a longer period on your PC (or Xbox One or Nintendo Switch). 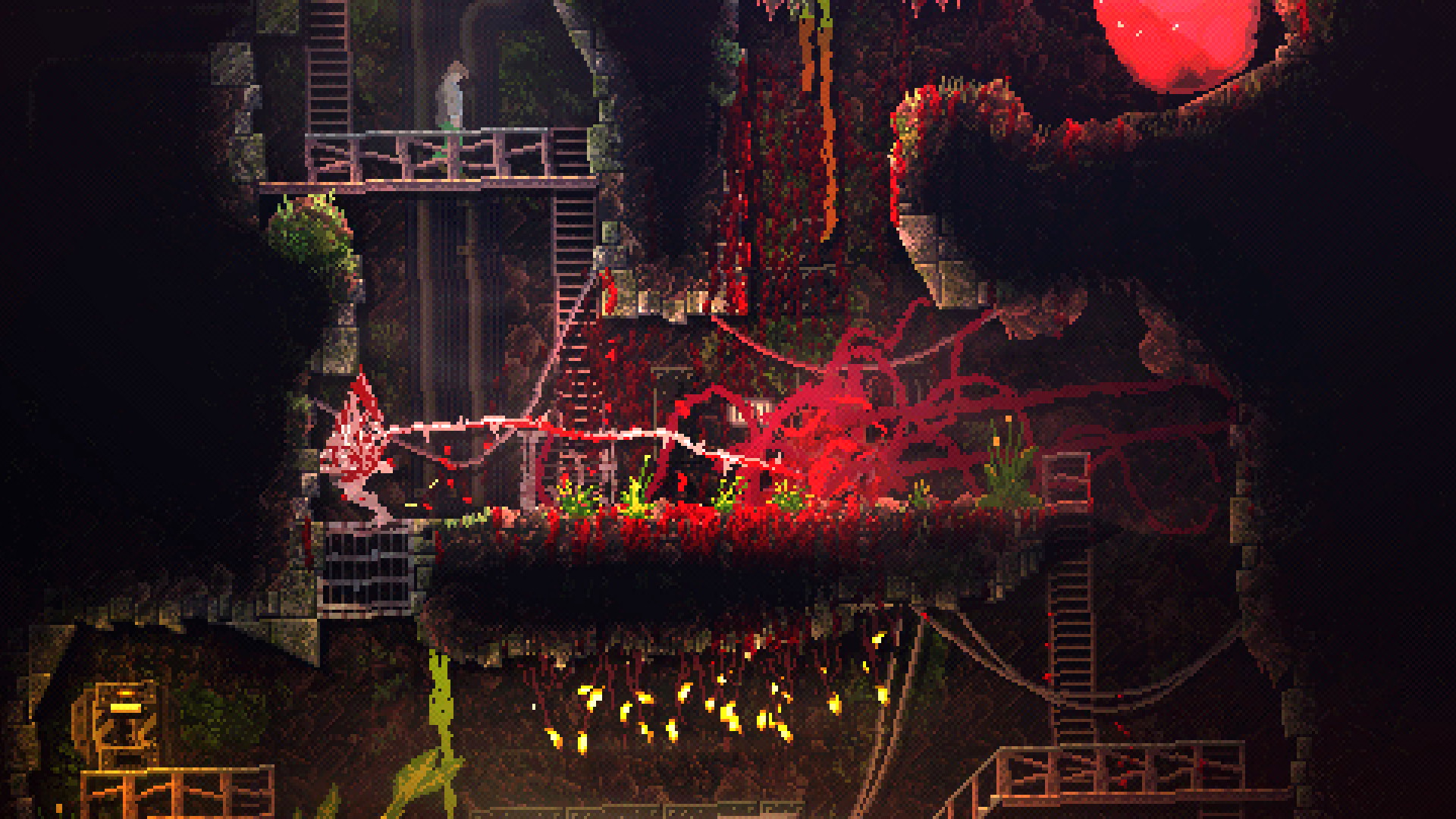 Carry on my wayward son

This lyric quote will make sense, but first, let me express how the positioning of the checkpoints do not seem properly thought out. They might not even be used that extensively, but at least they are there. I haven’t mentioned the strong point of the game yet – the visuals. No, it doesn’t look jaw-droppingly good, but it doesn’t want to be, and I can immediately name two, or three games that did not look modern and yet managed t be successful (Undertale, 20XX, A Robot Named Fight, The Messenger, here, have a fourth one, too). It resembles the 1980s style, which is also fueled by the sound design, which strongly expresses towards the player that they are now on the bad (?) side (mostly expressed over the sound effects). The soundtrack is also powerful, and I’m going to link it below.

Thanks to it, the ambience can also be called excellent, but it all falls flat due to the game’s length. The game is SHORT. No joke, you can beat it in three hours, but if you are slow and careful, you still won’t take more than five to six hours to complete it, and I don’t think there’s replayability either, making it a game you can beat in one afternoon.

Carrion is a 7 out of 10, no more. The game’s short, and I don’t see many reasons to play it more than once a year. Also, I would not buy it at its current price. I’d rather wait until it drops under ten dollars, but then, it can be a must-buy title. It’s a good idea to turn the horror style around, but it’s more of a light horror game with an emphasis on platforming and puzzles. Phobia Game Studio’s title is not something you’ll immediately throw in the recycle bin. However, the story is essentially a non-story, the checkpoints are stupidly placed, and the game is short. Still, it’s a good game, so it deserves a seven out of ten. It’s Metroidvania, but with a somewhat unique progression system. The 16-bit visuals are fitting the Nintendo Switch, and there are no technical issues on either console (it’d be ridiculous – the game is smaller than 100 megabytes).

– The combat feels a bit chaotic and unusual at first
– It doesn’t give you a clue on where to go, the checkpoints are dumb
– It’s ridiculously slow, and its story is meh

REVIEW - It's a decent indie game that, going by the title above, can be interpreted in multiple ways, but this time, the roles have been revered, and perhaps this is why the game sold 200K copies in one week. It alone sounds interesting. So it's time to grab a bite. Both figuratively and literally.     Eat   In Carrion, which continues to remind me of a 2000 Italodance song canned Carillon by Magic Box, has us as the monster with one, two, or god knows how many stomachs, which happen to be empty, so you will have to…
Carrion – Just A Bite
Carrion – Just A Bite
V
Carrion, apply directly to the Steam/Microsoft/Nintendo account