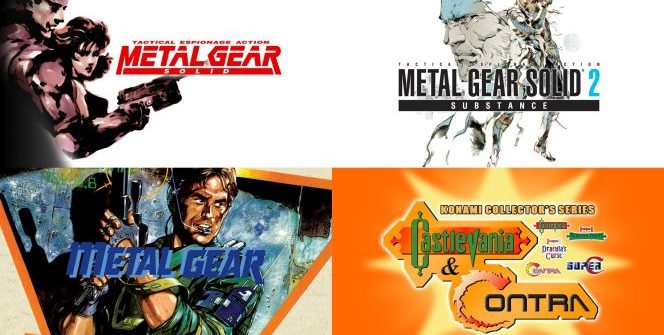 Konami‘s plans were uncovered… but we expected more.

We wrote a few days ago how Konami’s Metal Gear, Metal Gear Solid, Metal Gear Solid 2: Substance, and Konami Collector’s Series: Castlevania and Contra got rated by the Taiwan Digital Game Rating Committee. We now know why: these were released on GOG, but there wasn’t much effort put into them.

We’ll quote the official description for each game, as well link to them with the pricing. „Outer Haven is the name of a heavily armed land in the depths of southern Africa where the dreadful weapon called Metal Gear is developed. It is the mission of Solid Snake, one of the members of the secret army “Fox Hound” to sneak into Outer Haven are destroy Metal Gear. Go ahead Solid Snake!”, Metal Gear (6 USD/EUR) reads. That’s a little expensive, and what about Metal Gear 2: Solid Snake? „You are Snake, a government agent on a mission to regain control of a secret nuclear weapons base from terrorist hands. Now the international best-selling PlayStation game comes to the PC with better graphics, added features, and new gameplay modes! Unlike anything you’ve played before, Metal Gear Solid introduces a new genre of gaming where ninja-like stealth and a cool head are your best weapons for survival. […] VR Missions game included! Optional first-person play mode thrusts you into the action from the moment you suit up. Multiple game controller support and improved quick-save function for ease of play,” Metal Gear Solid (10 USD/EUR) reads.

„Solid Snake returns in Metal Gear Solid 2: Substance, the ultimate edition of Metal Gear Solid 2: Sons of Liberty, with all-new game modes, hidden characters, and storylines. Top-secret weapons technology is being mysteriously transported under cover of an oil tanker to an unknown location. Armed with an arsenal of new weapons, supplies and stealth manoeuvres, it’s up to Snake to infiltrate the transport and keep this deadly weapon of mass destruction from falling into the wrong hands! […] 350 VR missions and 150 alternative missions. Play through five new Snake tales involving Solid Snake. Unlock new playable characters and game modes. Contains the entire Metal Gear Solid 2: Sons of Liberty game plus the debut of the Casting Theater and Boss Survival mode. (These are mostly Substance-exclusive.) Utilize stealth and infiltration methods, such as diving somersaults, hanging from ledges and using disguises. A fully interactive environment where bullets pierce steam pipes, smoke reveals laser beams and wet shoes leave footprints. Powerful musical score composed by Harry Gregson-Williams (Armageddon, The Rock),” Metal Gear Solid 2: Substance (10 USD/EUR) reads. „The Beginning of a Legend… Return to the roots of Castlevania and Contra in one exclusive package on the PC. This collection of games brings the non-stop action, suspense and great gameplay of these fan-favourite games home for the first time in over a decade. Five complete classic Konami games: Castlevania, Castlevania II: Simon’s Quest, Castlevania III: Dracula’s Curse, Contra, and Super C. Two of Konami’s most popular franchises in one package. Quicksave allows saving at any time. The bloodline of the Belmont clan returns along with their ultimate nemesis Dracula in the three games that started it all: Castlevania, Simon’s Quest, and Dracula’s Curse. In Contra and Super C, Red Falcon is invading Earth and only two heroes can stand up to the hoards of alien forces,” Konami Collector’s Series: Castlevania and Contra (6 USD/EUR) reads. You can just emulate these, as well as Metal Gear. The collection likely is just a glorified emulator.

But what about Metal Gear Solid’s rumoured PlayStation 5-remake? (We mentioned this recently.) Why does Suikoden get no love?