REVIEW – Since Cyberpunk 2077 has been delayed again, this could fill the gap.

Let’s start at the beginning… 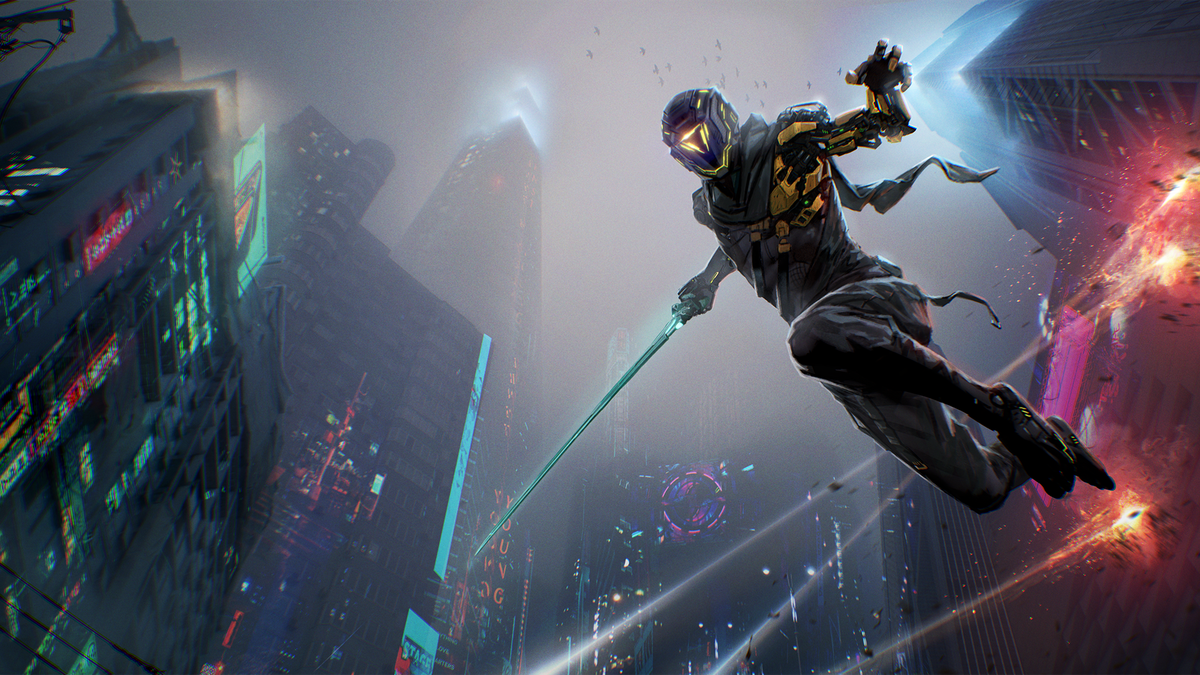 Imagine this whole game as a mixture of the parkour elements of Mirror’s Edge, some platforming similar to Dishonored, all of it set in a cyberpunk world, intending to hit the top of the tower. That’s pretty much what Ghostrunner is, where you, a cybernetic robotic ninja, grab a sword to destroy several enemies along your path. And speaking of swords, let’s also not forget the combos, and your skills can be upgraded in a… Tetris-like minigame where you have to place all your 2D pieces on an area. (I also recall a similar solution from a Mega Man Battle Network game on the GBA.) And if it doesn’t sound that easy to follow, then I have proven my point: the story is not that easy to go through, as you have to carefully keep an eye on the cutscenes and the story.

On top of it, let’s add the fact that the game might provide quite a challenge at a few points, but not in a trial-and-error type of way as say, the Souls games, but in more of a careful approach. You can fall a few times (and it will happen often, believe it or not), and you must think through your way to progress on the stage, and there are a few enemies that could also provide some unexpected challenge, which is why having a calm approach can be a winner in this world that has quite a strong ambience, and this is why I’d say that Ghostrunner is one of the pleasant surprises of the year, similar to Disco Inferno: instead of having an AAA price, it costs half as much, and it’s also available on GOG from the get-go, so you will not tear your hair out over it calling home repeatedly like a Denuvo game, providing a solid middle finger to those AAA games and those crappy DRMs.

The euphoria will overcome everything, as it’s going to be such a pleasant sight to see your character pull through the stage with style, getting ever closer to that dictator on the top of the tower. And to mention the visuals as well: yes, this is good. Congratulations, and I believe the audio is also a proper strong point of the game, even though I can be something of a sucker for a distorted voice, similar to what our protagonist has, inspiring me… 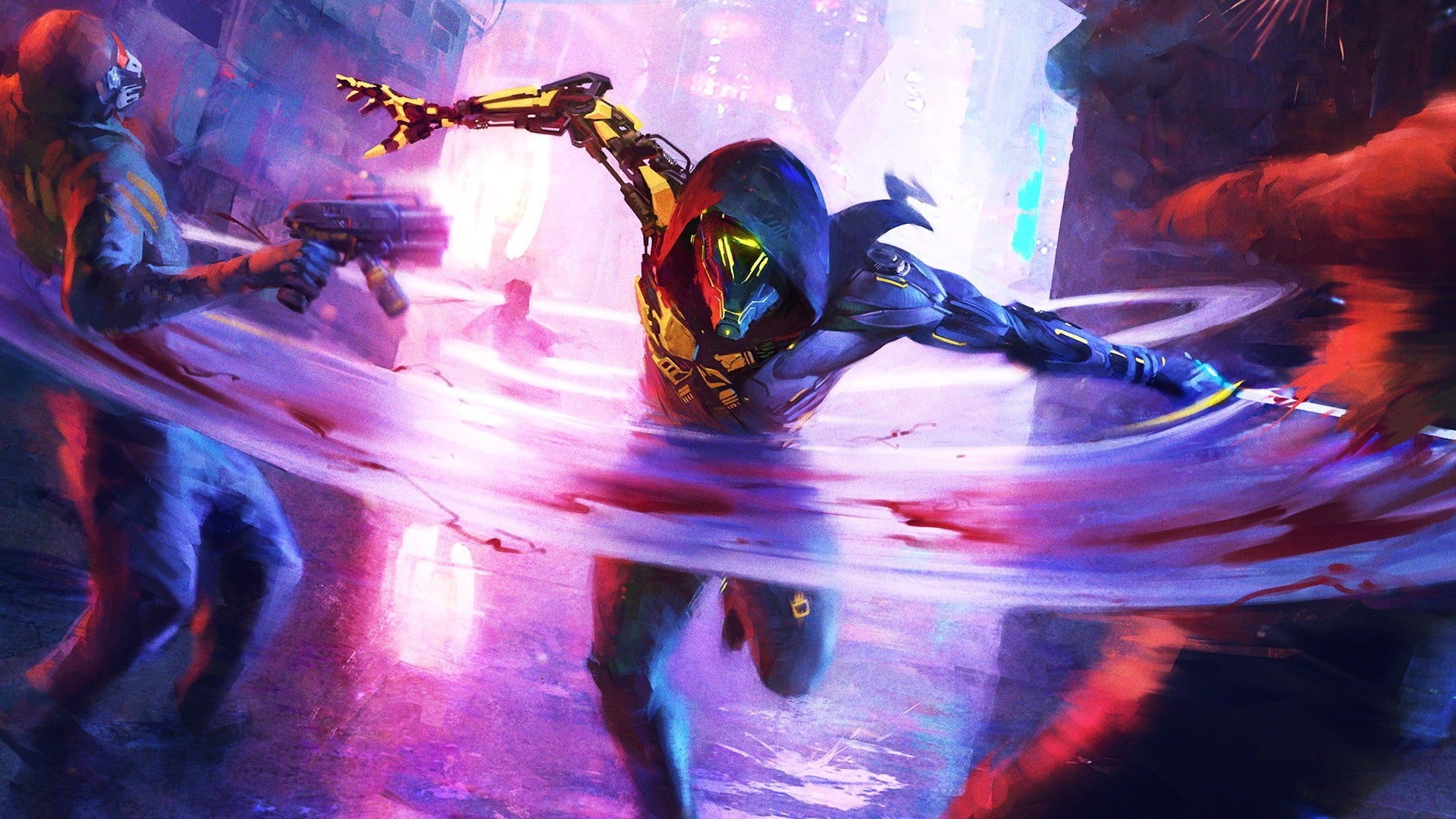 So the precisely performed jumps, the well-planned wall-running, and the meticulously timed slides are accompanied by the fact that dashing towards the enemies somewhat slow down the time, which will not give you an ample chance to awe in the world around you, and this reminded me of Superhot now that I think of it. Everyone dies in one hit. Everyone. Those who have creativity in their gameplay still need to be professional, and the potential presence of the frustration could keep the impatient players away. What a shame. Don’t forget the special abilities (getting everything and everyone down in a straight line – which is why I thought of Dishonored, as this feels like a similar blink move), or you can keep the bullets away with a nicely timed shockwave. Using these, however, won’t require planning but having split-second decisions made.

What else can be a negative aspect? Hm… perhaps the story isn’t as present as you’d expect it to be, even though there are some twists and turns. It might even feel tacked on, as it’s not as much in the background as in say, Superhot. And as I said before, I’ll say it again: I can’t recommend Ghostrunner immediately to everyone, as it could quickly grab your throat as you struggle to breathe. Here’s the soundtrack, and I do recommend listening to this.

I think only one game got such a rating this year, namely Disco Elysium. I might have overrated Ghostrunner a bit here, but I believe it deserves the score, as – despite its flaws – it’s a game that dares to go against today’s AAA and AAAA (copyright by Ubisoft) titles’ trends. This game is good. Difficult but good. Frustrating but good. Quite crappy for those who give up. I could have given it a 9.5 out of 10 if it was a little longer, as it might be lacking in this aspect… but if you don’t get your act together, you will not notice it for quite a long time.

This will be a perfect game for the Nintendo Switch – yes, will, as Ghostrunner‘s Switch port got delayed to November, while it’s out everywhere else. Ghostrunner is the game that walks its patch, not giving a damn about anything or anyone, and it just does the job but nothing more.

REVIEW - Since Cyberpunk 2077 has been delayed again, this could fill the gap.   Let's start at the beginning…     Tower   Imagine this whole game as a mixture of the parkour elements of Mirror's Edge, some platforming similar to Dishonored, all of it set in a cyberpunk world, intending to hit the top of the tower. That's pretty much what Ghostrunner is, where you, a cybernetic robotic ninja, grab a sword to destroy several enemies along your path. And speaking of swords, let's also not forget the combos, and your skills can be upgraded in a... Tetris-like…
Ghostrunner – Mirror’s SuperPunk
Ghostrunner – Mirror’s SuperPunk
V
„The ghosts of the old world are gone”

„The ghosts of the old world are gone”