TSMC To Produce 2 Nanometre Chips By 2026 TSMC spoke on June 16 at the North America Technology Symposium, where it was announced that the chipmaker already has plans to start manufacturing 2nm chips. The goal is to begin shipping chips to consumers (i.e., the companies that order from them!) as early as 2025 so that devices equipped with this technology could hit the stores in 2026. The company has detailed its future expansion plans and provided information on its processes and packaging technologies, but hardware-wise, 2nm chips are relevant for us.

Moving to a 2nm node (N2, as TSMC calls it) means the company will be switching from its established FinFET technology to a nanoscale transistor architecture. It will be rapidly adopted in computers within years. TSMC’s solution uses GAAFETs (gate-all-around field-effect transistors). Still, to avoid an over-technical description, this switch aims to reduce quantum tunnelling effects and leakage, which can be problematic with FinFETs. The GAAFET can remedy them. N2 reduces the processes: it achieves 10-15% higher power than TSMC’s N3E node, while at the same frequency and with the same number of transistors, power consumption is reduced by 25-30%.

The N3 products are not long in coming, and TSMC plans five categories. After the first-generation N3 comes the more advanced N3E (Enhanced), the performance-focused N3P (Performance Enhanced), the density-enhanced N3S (Density Enhanced) and the ultra-high-performance N3X (Ultra-High Performance). Manufacturers can expect to see the first N3 chips from the Taiwanese chipmaker at the end of the year. So, for example, the Apple iPhone 14 won’t come with it. However, devices with the M3 processor may already use the technology, and Intel’s 15th generation processors (Arrow Lake) and AMD’s Zen 5 CPUs from 2024 may also turn to it. Nvidia’s RTX 50 series and AMD’s RDNA 4 architecture are also a good two years away for video cards.

As technology is evolving rapidly, it’s too early to guess where TSMC‘s N2 chips might show up. The AMD, Nvidia, Apple, and Qualcomm foursome will undoubtedly be interested. 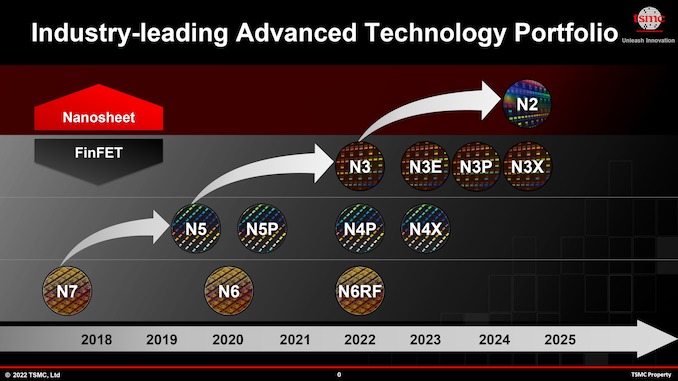