SERIES REVIEW – “Our faith breeds dangerous men” is the motto of the Disney+ crime series Under the Banner of Heaven, reminding us that all the terrible crimes and inhuman acts we see in this series are, for one thing, can be traced back to blindly zealous religion. Andrew Garfield and his co-stars are impressive in this real-life crime thriller about a bloody sectarian murder set in the Mormon community.

In 1980s Utah, Detective Jeb Pyre (Andrew Garfield) is a profoundly religious Mormon family man. When he is not working, he mows the lawn, plays with his twin daughters and takes care of his sick mother. When called to the scene of a double murder one night, it’s clear that Pyre is still relatively new to the sinister world of criminal investigation, nearly passing out and throwing up at the scene. The murdered: Brenda Lafferty (Daisy Edgar-Jones) and her fifteen-month-old baby, Erica. The most obvious suspect who seems to be caught in the act is Brenda’s husband, Allen (Billy Howle). What appears to be an investigation into a family dispute gone horribly awry turns into an untangling of a family’s web of lies, abuse and crime – all hidden under the self-righteous and blinding blanket of the Mormon faith. The tragic, often shocking and deeply thought-provoking series is based on Jon Krakauer’s documentary novel of the same name, which uses actual events and is interwoven with Mormon traditions to draw the viewer into the suffocating, male-dominated and claustrophobic environment that is often associated with this faith. . Do not drink, smoke or consume caffeine. Women must maintain devotion to their priesthood, obeying everything their husbands tell them. For a modern audience with little or no knowledge of the Mormon faith, this is an incredibly shocking lesson – and a warning sign as to where blinded sectarianism leads. Back to the plot: following the murder of Brenda and Erica, Detective Pyre and his partner Bill Taba (Gil Birmingham) get to know the immense and once respected Lafferty family, which consists of six sons – Ron (Sam Worthington), Dan (Wyatt Russell), Robin (Seth Numrich), Sam (Rory Culkin), Jacob (Taylor St. Pierre) and Allen – and the series takes time to explore the dynamics between the six brothers, their parents and their wives through flashbacks. Brenda, played by Edgar-Jones, on the other hand, comes from a devout Mormon family with a much more progressive and modern patriarch and is more concerned with getting an education leading to a promising career – which is contrary to the values ​​of the Lafferty’s since they believe that women should have as many children as possible. Should be the primary consideration.

Just when the detectives think they’re close to a breakthrough in the case, another troubling plot twists things, causing the real culprit to slip even further from their grasp. We learn that the Laffertys have ties to anti-tax groups, fundamentalist Mormons (polygamy and the like), and more sinister pursuits. In contrast, Brenda is an outsider, curious, independent and “wants to understand everything”. However, cracks begin to form, and it soon becomes clear that almost every family member has a motive to kill Brenda. But there is more, in the form of a list of Mormons who must “penance with blood,” that is, they must be killed for the “sins” they have committed. A real “slow burner”, with scenes reaching back into the past

The series’ pace can lead to impatience among those who dislike the “slow burner” series with a slowly building plot. Some scenes go back to the 1800s that feature Joseph Smith (the founder of the Mormon religion). Still, if you lean into the journey the story takes, the audience will understand better why these characters believe what they do, which is acceptable. In the meantime, the intricate and branching plot of Under the Flag of Heaven continuously introduces new characters and subplots, but the tension continues to increase until the grand finale. Anyway, the writer of these lines had a hard time stopping him from “cheating” and reading after what happened to the real people – even before the end of the series.

One of the highlights of the series is undoubtedly the acting. Andrew Garfield, the former Spider-Man actor, is simply stunning in the role of Jeb, the Mormon detective. The latter has to experience not a little cognitive dissonance and terrible inner tension as he is increasingly forced to question the foundations of his bigoted faith in connection with the increasingly gruesome case. The character with a tortured soul, who is blindly zealous at first and then gradually questions the dogmas of religious faith, is no stranger to the actor, since

And the heart of the series is undoubtedly Daisy Edgar-Jones, who plays a mother with a tragic fate. Her strong-willed, harmless, and curious Brenda makes this story tragic. Seeing her fall in love and try to make the best of herself while somehow knowing how it might end up for her. Daisy Edgar-Jones’ equally charming performance makes the bloody crimes even more gut-wrenching. An accurate diagnosis of zealous sectarianism: the killers of the Lafferty family

In the background is the Lafferty family. It’s almost creepy how much fun Dan Russell has played such a horrible character, who, hiding behind the supposed “morals” of his faith, is the evilest in the series. Billy Howle is also excellent, blindly zealous at first because of his desire to conform to the family’s strict faith, but, like Job, he also became more and more like Allen in his religion. Allen’s portrayal is a bit irritating at first, as his character is constantly smarting, but as we increasingly understand what motivates him, he gradually becomes likeable. It becomes increasingly clear that perhaps he was just the good seed in a horrible flower bed, and his wife and child were just collateral damage.

The most pleasant surprise was Gil Birmingham, who plays Taba, an extremely pragmatic and intelligent atheist Indian detective who also represents the viewer’s point of view. Through his point of view, we enter this bigoted religious world. He is the outsider, constantly amazed by the Mormon faith and the endless nonsense they think is right. His outrage at the Mormons when they take matters into their own hands and remind Pyre that religion has no place at a crime scene is a well-earned, down-to-earth perspective that the viewer is sympathetic to, and Birmingham delivers with devotion and charm. He is the cynical sceptic that the story needs to contrast extreme religiosity. Undertake this task.

When it comes to explaining Mormonism and understanding their suspects, Pyre seems to be the dominant detective – but when they have to go into the gruesome and more violent details and investigate the investigation as a cop rather than a human, it’s Taba who takes the lead in the situation. It’s a beautiful adaptation of the well-known story of two opposed investigative partners; they both have their strengths and use them to their mutual advantage to aid their investigation, not to put the other in their place.

He will not chew his truth into your mouth.

Under the Banner of Heaven is a slow, gripping clash of faith and morality, it does not ask viewers what is right and what is wrong but shows how a character can eventually become distorted in the eyes of people who see their bigoted religion as they put it before their humanity, and it will inevitably have tragic consequences. At the same time, the seven-part series is an engaging detective drama with a good dose of tension and excitement, great performances and thought-provoking questions.

Under the Banner of Heaven

Under the Banner of Heaven is a slow, gripping clash of faith and morality, it does not ask viewers what is right and what is wrong but shows how a character can eventually become distorted in the eyes of people who see their bigoted religion as they put it before their humanity, and it will inevitably have tragic consequences. At the same time, the seven-part series is an engaging detective drama with a good dose of tension and excitement, great performances and thought-provoking questions.

User Rating: Be the first one !
Spread the love
Tweet
Tagged Andrew GarfieldUnder the Banner of Heaven 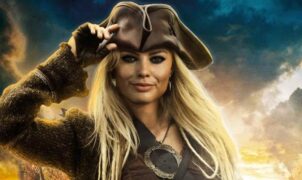