Ubisoft goes from one to two.

The French publisher announced how they plan to expand The Crew 2, which will offer cars, bikes, boats, and planes, post-launch. Each month, two new vehicles will be added, and about every three months, a new, free update will also show up. The first one, called Gator Rush, will come in September.

It „will let players enjoy a tropical cocktail of bouncy fun and wacky races on all kinds of surfaces and playgrounds, mastering a new and exotic discipline: the Hovercraft. This free update will also introduce five completely new vehicles to the line-up, as well as the new “Legendary” rarity level on performance parts that players will be able to collect in-game,” quoting Ubisoft. The update will also bring in a new loot system. (We’re somewhat afraid by that it might follow Need For Speed: Payback’s and Star Wars: Battlefront II’s route…)

If we buy the 40-dollar Season Pass, we’ll get a 20% VIP discount in the in-game store, an exclusive house location, two exclusive outfits, as well as three vehicles on day one Porsche 911 Turbo 3.6, Supermarine Spitfire MK IX, Ice Marine Bladerunner 35).

We can also prepare for an open beta for the game if we can believe The Crew 2‘s beta website – more details should be announced at E3. „Coming soon,” eh?

Ivory Tower, the developers of The Crew, confirmed in a blog post that they will stop adding new content to the first The Crew (they ended patching a long time ago), but they will perform server maintenance if necessary. The servers will NOT be shut down yet. 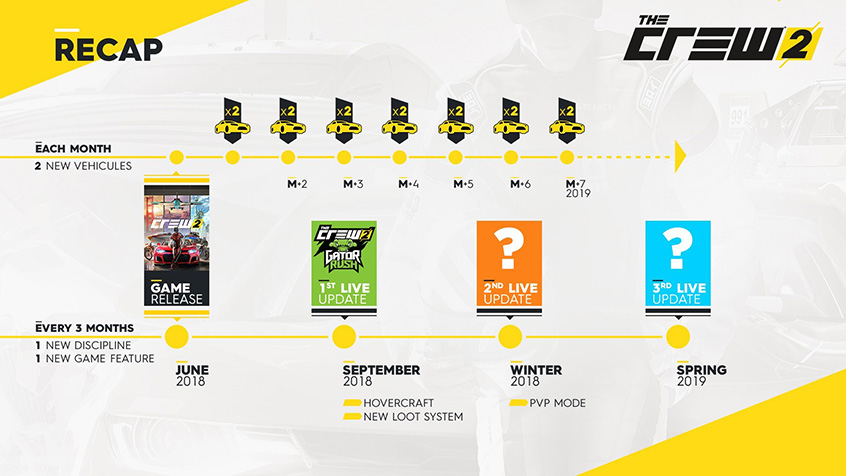