Is Final Fantasy VII Remake In Development For Xbox One, Too? Final Fantasy XV‘s story might repeat itself: initially, it was announced as Final Fantasy Versus XIII, exclusively for PS3, but after some development hell, it became a multiplatform game…

Square Enix has previously released a longer gameplay video (for the State of Play) in early May for the Final Fantasy VII Remake, which was announced almost four years ago with the promise that during E3, or the Square Enix Live E3 2019 to be exact, they will reveal more about the game. (The same goes for The Avengers game, which we discussed twice this week already.)

The Irish GameStop comes into the picture here – their website lists Final Fantasy VII Remake for the Xbox One, even though the game was only shown on PlayStation 4 until now. (Which is why we called this an exclusive for a good reason.) However, it seems after Final Fantasy XV and Kingdom Hearts III (with the latter being a mostly PlayStation-based series!), Square Enix is making the remake, which will launch in two episodes, a multiplatform title, making it available on both Sony’s and Microsoft’s console. (75 euros, though? More than the usual 60…)

Meanwhile, Kotaku’s Jason Schreier got a question on Twitter: „So could we  possibly be getting (at least) Cyberpunk 2077, The Last Of Us Part II, Ghost of Tsushima, George R. R. Martin’s FromSoftware game, 1-2 Ubisoft AAA games, and Final Fantasy VII Remake part 1 in the first half of next year? Hmm…” His answer was „Based on what I’ve heard, yes to all of those. 2020 is going to be wild!”

So Square Enix might have secretly taken Cloud’s adventures, which first came out on the first PlayStation in 1997, a multiplayer title, which is more than nothing. Remember when they announced the PC port being ported to the PlayStation 4 during the 2014 PlayStation Experience… (but the company had some retribution announcing the remake at E3 2015) 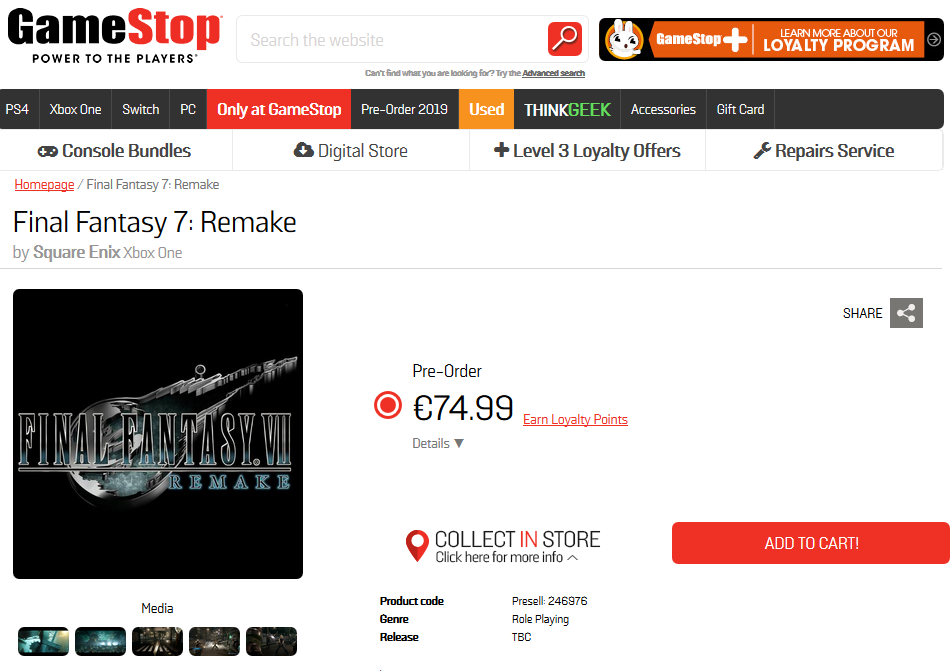