REVIEW – After Bound by Flame and The Technomancer, Spiders is back at it again, Greedfall which – wow, what a surprise – was announced with big ambitions, but the execution has once again been problematic, so going by the name of the game, they (also) need to reduce their greed perhaps.

After WRC 8, I continued with an RPG, featuring Constantine De Sardet (of course it has to be a French name – the developers have to appeal to the local gaming community; at least we can choose their sex), where your goal will be to find a cure against a disease, while you eventually end up on an island where you will spend a lot of time.

I think Greedfall‘s world looks and feels decent. The game is alright in this aspect, as well as in its story, and it tries – not just tries, dares – to be dark in certain points. Prepare for some unexpected things, so I’m serious when I say that there is… or maybe I should say, there WAS potential for something big here, and then, I didn’t even mention the relationship we have with the factions (and their relations with our team members(, because these play a role how people react to us.

So you have to get ready to be tricky to know who to pick for which location, and at bigger events, you’ll get to learn some background lore for the factions. The story could take it all to a higher level, but the issue that I seem to remember from 2017’s ELEX is back once more: things seem to start slowly (and it will be an issue elsewhere a bit later, too). The dialogue options also feel a little drab. There doesn’t seem to be any kind of variety, and Greedfall is nowhere close to BioWare’s games in this aspect. (Even Mass Effect: Andromeda.) 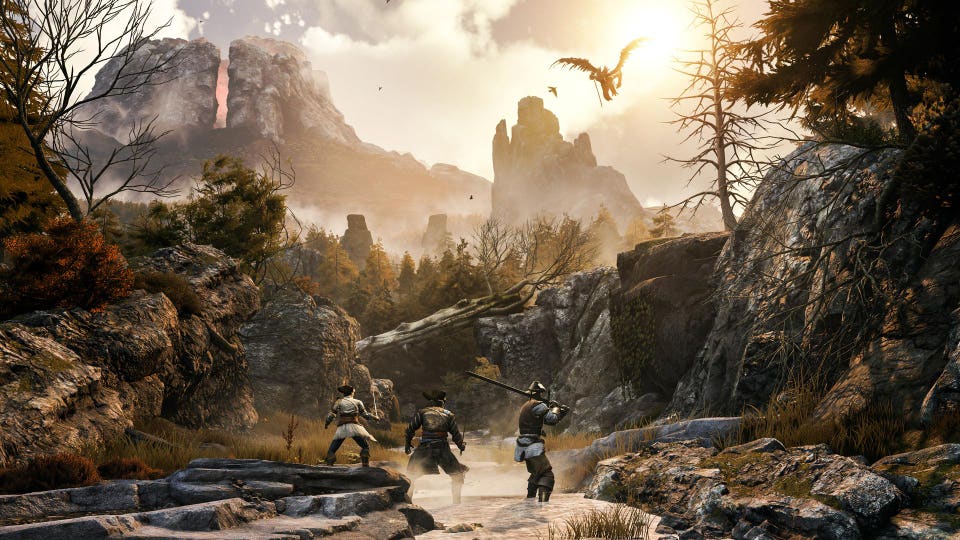 …is the city where you will start. There are multiple political factions, and somehow, the merchants seem to be exempt from all this (and they also deal with children it seems), but shortly, you will end up on an island called Teer Fradee, where you will become a governor. Here, the inquisitors are not only killing the natives of the island, but they also seem to be in conflicts with each other. (So, in other words, it’s pretty much America without the magic.) The island, divided to regions, is big, but you’ll have to get there because the combat feels extremely boring against the same enemy types, such as birds, wolves, and some bandits, and after a while, you might end up developing some Pavlov-like reflexes for these creatures. You’ll have the usual light and heavy attack, as well as the parry and the dodge move. You can also use the class-exclusive skill, plus, gee, what a damn surprise, a fury meter that seems to be used differently depending on the weapon you use, as some might require less than something else you previously used. (And these moves all dish out some good damage.)

For example, if you start your game as a mage, then you can use the Stasis move to paralyze the enemies so they stick in one place (later on, you can do the same thing to groups with Storm), but eventually, you might learn a healing spell (which is even more useful for developing those Pavlov reflexes), or the Shadow Burst, which causes damage in a small circle… and, since we’re talking about an RPG, you can get more skills by spending the skill points, but, again, the whole thing starts to ridiculously slow, and when you get the chance to learn a new skill, you’ll end up seeing something you have already seen in other games because it’s nothing out of the ordinary. And I didn’t even say that the skills take so much time to be achieved (and to develop them), or to increase your physical power, so Spiders has made a mistake here. Also, the combat itself feels so average and run-of-the-mill. You can already think that the result is average at best, and I didn’t even mention things like the sometimes wtf levels of bad hitboxes, or the fact that your teammates might end up not moving, which is so useful for me during combat. I wish I could pull out a two-handed weapon to knock some sense into them and perhaps to finally get them moving.

In the combat between the intelligent and the native people, Greedfall reached a 6.5 out of 10. The reason why I don’t score it higher is the combat and the character progression blotting the copybook, plus you’ll see a lot of interiors repeat within building, and you might also find yourself running from point A to B far too many times, so despite having a good world and story, Spiders’ game – once again – falls short because of its execution and gameplay. At least it is better than The Technomancer, the Mars adventures of the previous game from the devs. So get this game if you are an RPG fan, but only for about 20 dollars, otherwise, I’d tell you to avoid this game altogether. There’s not enough time in life to properly grind your character to somewhere useful.

REVIEW - After Bound by Flame and The Technomancer, Spiders is back at it again, Greedfall which - wow, what a surprise - was announced with big ambitions, but the execution has once again been problematic, so going by the name of the game, they (also) need to reduce their greed perhaps.   After WRC 8, I continued with an RPG, featuring Constantine De Sardet (of course it has to be a French name - the developers have to appeal to the local gaming community; at least we can choose their sex), where your goal will be to find a…
Greedfall – Spiders III
Greedfall – Spiders III
V
Island invasion