REVIEW – Ion Fury is a good game, which dares to have balls, dares to not follow the modern trends, and dares to be old. Ion Fury is simply put, a pixel fighter in the polygon age.

This game is not for those whose first console was in the sixth console generation. SEGA Dreamcast. Sony PlayStation 2. Microsoft Xbox. Nintendo GameCube. No – Ion Fury is going a few years further back in time even from a technical perspective, and while the result isn’t perfect, it is still a title I can highly recommend. 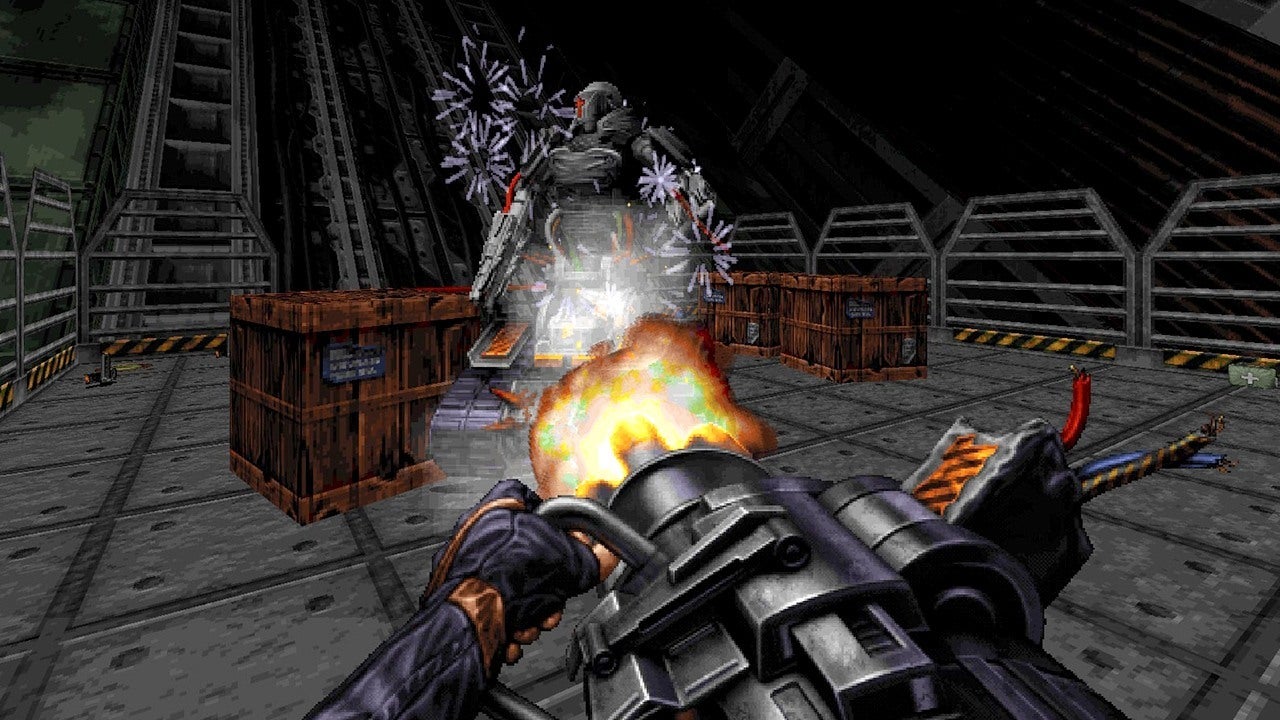 In this game, you control Shelly „Bombshell” Harrison, who was also the protagonist in 2015’s Bombshell. While that was technically a pseudo-isometric TPS, this game is an old-school FPS that uses the Build engine. Shadow Warrior. Duke Nukem 3D. Just two examples of what was made with Build. Comparing this game with Duke is unavoidable: the publisher, 3D Realms, initially wanted to make Bombshell with Duke as the protagonist, but since Gearbox didn’t allow that (they instead decided to re-release Duke Nukem 3D, as they don’t dare to make a brand new title after Forever, lol), they decided to make a female Duke. So yes, there are sexual references, innuendos, signs, and displays. If you get angry over it or get offended (or should I say triggered?), then you take this game too seriously.

The story is about a cybernetic cult rising, and Shelly vows revenge – Ion Fury, which I will call Ion Maiden from now on until the end of the game, because oh awww it was sounding too similar to Iron Maiden and the idiotic legal threats followed, is set before Bombshell. Shelly will regularly have those one-liners. No, she’s not getting up to the level of Duke. Yes, there’s the charm still I can’t say that about the music right now, but seeing how I don’t have a negative memory of it, it cannot be bad – I’d rather use this term to a few of those one-liners.

Visually, the game is not beautiful (aside from some effects here and there that give the game a bit of ambience…), but Ion Maiden is still looking impressive. The two-dimensional sprites are very good, especially if we consider the limitations of the engine. Props to Voidpoint – they had some great work done here. Thankfully, the weapons don’t go for that fake 3D look either, so what you see can be called authentic. The weapons are working just as intended – and in Duke Nukem 3D -: you can get some damage dealt even with the basic pistol, but you’ll find bigger and better guns that will be necessary against stronger enemies. (Perhaps I’m greedy, but I think a few more weapons should have been included, as their expansion abruptly seemed to end.) 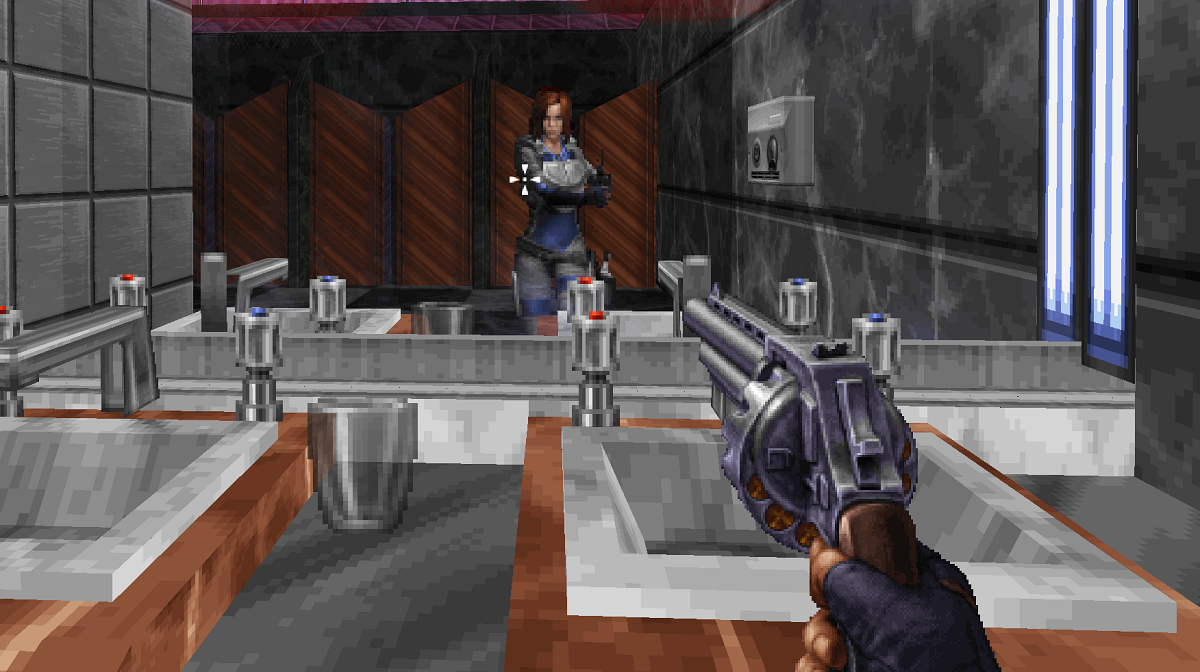 The strength of Ion Maiden is in the gameplay. It is an extremely quick romp with even more pace than Doom 2016 showed a few years ago. The maps are packed with secrets, but I do have to say that they are huge to the levels of being a labyrinth. It’s not a shame to admit that you can get lost. However, if you are in action, you will have an extremely good experience! The game is hard, but it’s also not a negative: the game with balls require a player with balls who is capable of keeping the events under bay with Shelly (who is perfectly controllable in return) at the helm. When you get to the end of the game, you’ll meet the cult leader, who is another reference to Duke, as he is voiced by Jon St. John, THE voice of Duke!

It’s also not shameful to say that Ion Maiden can kick your ass here and there – you can’t exactly play like Rambo, but combined with the game’s pace, you can still have an adrenaline bomb while shooting the baddies for about six hours if you don’t play that badly. However, I’m saying that you might need 7-8 hours to beat the game, as the failures, plus looking for secrets could add up some extra time. The ending and the final boss, however, is where the game slipped from a nine to an eight-and-a-half… the developers should have paid attention.

I’ve got breasts of steel

Ion Maiden, reverting the name to Ion Fury here, is a recommended purchase. It might be the second time this year that I say you should buy a game without strings attached. Duke Nukem 3D’s lifestyle lives on, and while Mr Nukem is not getting new adventures, it is a good replacement. It’s like a private label product in a supermarket: it’s cheaper, the name is different, but it offers the same quality as the other product that has a brand behind it. Ion Fury is an FPS that has no cultic IP behind it, yet it takes cues from one. It is a shooter that throws today’s expectations right into the basket, and it goes back to 1996 without any fucks given. If only the level design was slightly more refined, if only there were a couple more weapons, and if only the game’s end was somewhat better, I’d have given this game a nine.

– You might get lost on some stages
– One or two more weapons would have been good
– What IS that endgame part?

REVIEW - Ion Fury is a good game, which dares to have balls, dares to not follow the modern trends, and dares to be old. Ion Fury is simply put, a pixel fighter in the polygon age.   This game is not for those whose first console was in the sixth console generation. SEGA Dreamcast. Sony PlayStation 2. Microsoft Xbox. Nintendo GameCube. No - Ion Fury is going a few years further back in time even from a technical perspective, and while the result isn't perfect, it is still a title I can highly recommend. Bombshell In this game, you…
Ion Fury – You Mean Ion Maiden
Ion Fury – You Mean Ion Maiden
V
Oldschool romp.