REVIEW – A planet that needs to be discovered, similar to Sean Murray’s creation (which has since done such a 180° turn that it should be made into a film), but still, it is a unique experience to look around on the A-RY 26 planet, where we got stuck. 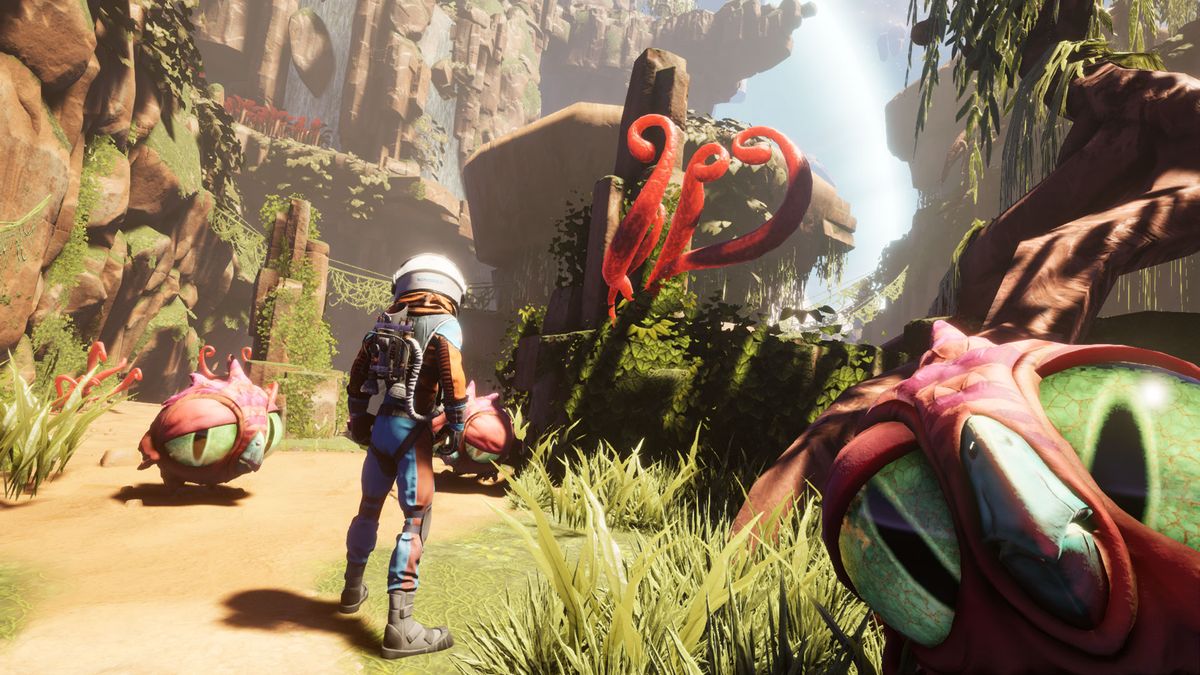 …is the company, where our hero works. Throughout the adventure (discovery…), we’ll often receive emails from the boss, Martin Tweed. (There’s not a worse thing in life than that. Never.) Looking for fuel, cataloguing the aliens, and EKO, the talkative artificial intelligence, whose style is similar to Claptrap – the rest is up to you. The story isn’t mouth-fed to you by Typhoon Studios. What you see, though, is humorous, and it deserves praise and attention – the Moba Moba Mobile is a perfect parody of the gaming industry that suffers from microtransactions, money-hungry bigwig fat cats and a total lack of ideas.

The title a few lines above is intentional, as the discovery and the information searching elements of the gameplay resemble No Man’s Sky style, so with your visor, you can discover your environment, and you can also get several types of minerals. However, there’s no lack of oxygen, nor a limit on how much you can carry. Sure, you have HP and stamina, but those are mostly here to make it an actual video game, and these two numbers serve as a basis of one. You can also improve your character with boots to stomp with, jetpacks, and gloves that you can use to throw elemental grenades. The gameplay’s loop is about you looking for things, find minerals, get to an „altar” to gain power, back to your ship, and then 3D print something. Back to square one. Your single firearm, which would be the Nomad pistol, can be upgraded by the minerals, but you also have to consider your Explorer rank – and you can either improve that by cataloguing the aliens, or complete some bounty tasks.

The joke here is that the Explorer rank didn’t seem obligatory throughout the game whatsoever. Also, the game didn’t feel that long either – you can complete Journey to the Savage Planet in five to seven hours, and during this time, you can look around in most of the four main regions. There are secrets, yes, but they don’t seem necessary. There are like thirty alien types, but most of them are just the same model in a different palette. The lack of variety can also be noticed in the bosses, with a whopping number of three of them. The whole thing is saved by the fact that you can play this game cooperatively, but first, I’d recommend beating the game solo, as the platforming elements are highly engaging, and you can also effectively check out every location you see in the background, and that should satiate the hunger of the maximalists. I firmly believe the level design is excellent.

You can climb, jump, get to places that don’t seem possible at first glance, and it has some puzzle elements to it, too. You can create some ropes with the Grapple Seed, or you can get rid of those meat-eating plants with the Flufferbird, and plenty of times, you might find yourself just looking around, rolling the camera in one place. It’s good. But it’s not good that there is no map. Not even a minimap. I also can’t say that this game has replayability.

There’s not a lot in there that would make me go back and play this game again. And that’s why this game cannot get an eight out of ten, and if I was harsher, it’d probably not get a seven out of ten. Yet, you might start this game in the evening, and when you look up from Journey to the Savage Planet the next time during its staff roll, you might see that it’s about to sunrise out there. It could happen, and as a co-op game, it could eat your time.

If the photo mode got a bit more care (I seemed to have only one fixed posture in it), the combat was a little more than this bare minimum, and perhaps if there were more enemy types and just a bit more content, then Journey to the Savage could have easily been a massive surprise, as it has its good things: the humourous style, the eye-candy visuals, the exploration, and the platformer elements can be considered as a good starting point. It’s typically a game that could have taken a bit more investment to be even better. (Perhaps this is why it’s exclusive to the Epic Games Store on PC?) Too bad that it’s a one-time game.

I know, it’s not the right term for this type of game, but still: if you beat it in about seven hours, why would you play it again aside from co-op? The game’s world has more in it, so I can imagine it getting a sequel. Until then, don’t buy this game at full price. No Man’s Sky beats this game, but not in the humour aspect. Oh, and the Explorer rank being somewhat unattached to the game design also felt awkward. Either make it obligatory to improve, or just leave it out of the game altogether. So let’s stay with a seven out of ten for Journey to the Savage Planet. That’s a good score.

REVIEW - A planet that needs to be discovered, similar to Sean Murray's creation (which has since done such a 180° turn that it should be made into a film), but still, it is a unique experience to look around on the A-RY 26 planet, where we got stuck.   Exploration of space planet. Kindred Aerospace ...is the company, where our hero works. Throughout the adventure (discovery...), we'll often receive emails from the boss, Martin Tweed. (There's not a worse thing in life than that. Never.) Looking for fuel, cataloguing the aliens, and EKO, the talkative artificial intelligence, whose style…
Journey to the Savage Planet – Yes Man’s Sky
Journey to the Savage Planet – Yes Man’s Sky
V
Not-so-savage

Journey to the Savage Planet

User Rating: Be the first one !
Spread the love
Tweet
Tagged Journey to the Savage Planet REVIEWPCPlayStation 4Typhoon StudiosXbox One