The publisher giant wants to close its Versailles office altogether, and the French employees are having none of that.

If Activision Blizzard had a different French office, it wouldn’t be such a problem, but they have nothing else. Thus, the unions of the employees in this office are going for a strike against the publisher, and it’s not the first case either. You can see the image from this tweet below. The letter reads the publisher wants to close the office even though the publisher said it wasn’t even planned, so this immediate closure thought was possibly planned for a while, meaning they were lying about it.

The letter says that the closure of the office will fire 285 people, even though some of them have been working here for over three decades (!), and this would happen right in the middle of the coronavirus global pandemic, which has a lot of uncertainty. It also adds how in 2019, Activision Blizzard tried to lay off 133 employees, but this plan was promptly shut down in court. Activision Blizzard then provided a compensation package for 134 members who left in early 2020 after long negotiations.

The letter also points out how Activision Blizzard attempted to cut further jobs this March, which also got cancelled. In retaliation, the publisher „willingly deteriorated word conditions to a point where psycho-social risks raised dangerously, forcing work inspection to intervene and the CSE to launch a ‘Droit d’alerte’.” CSE stands for France’s Social and Economics Committee, and a Droit d’alerte is a right to alert, which will lead to an investigation of the workplace. It also questions the logic behind the closure, saying that there is a lack of competitiveness, which makes no sense, as the gaming industry is thriving at the moment… not to mention how its taxes have been cut as well.

The French workers have a lot of rights, and we’re talking about a publisher whose CEO (Bobby Kotick) has been criticised by investors for taking too much of pay home annually… and it’s the same Activision Blizzard that laid off 700 people a few years ago. 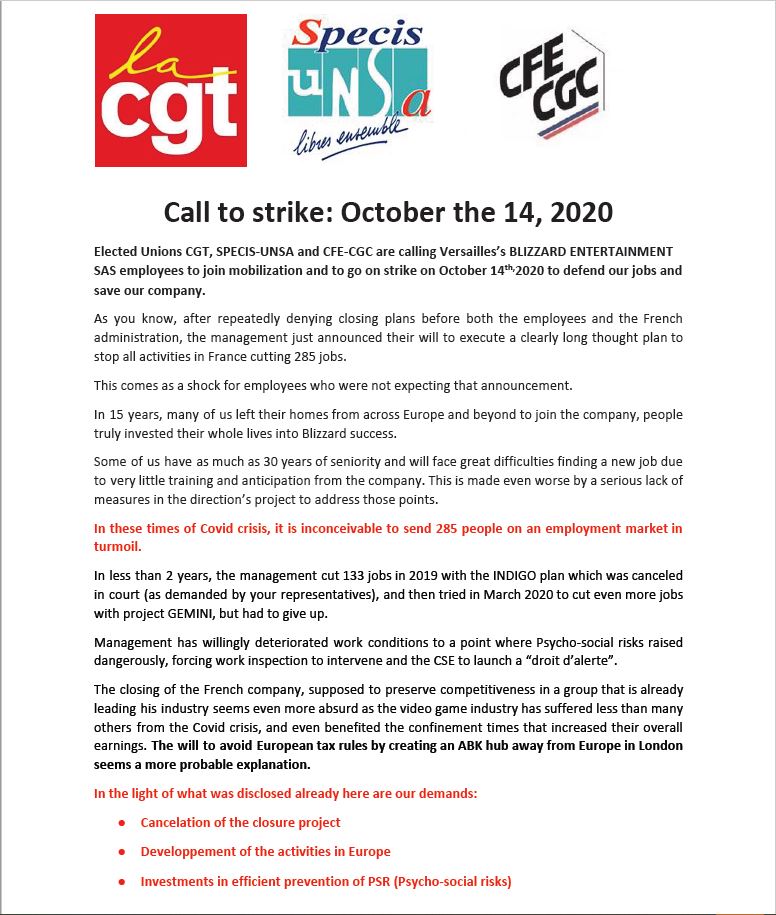