The Far Cry 6 game with the six in its title will get free Rambo and Stranger Things missions.

Ubisoft announced how Far Cry 6 will expand after it launches. It not only means how greedy the French publisher is, but it also brings us to the question of why the game doesn’t launch with this content altogether. Still, let’s get into the details: we previously heard that the previous antagonists of Far Cry would make a return. There will also be crossover missions.

These were all the paid content. There will be free content as well, including three crossover missions featuring Danny Trejo (an American actor, you might know him as Machete), Rambo, and even Stranger Things will make an appearance. “Every week starting from launch – and available after the completion of the main campaign – supporters of Antón Castillo will rise across the island of Yara and pose new threats for players to eliminate. Players will need to track them down and eliminate them to earn some new gear.

Six operations will introduce new gameplay mechanics in unique new areas in the world as players must snatch highly unstable chemical weapons from Antón’s arms dealers and get to the extraction point before it overheats. The first two locations – Mesozoico and Maceo – will be available at launch, and the other four maps will launch later,” Ubisoft added.

Far Cry 6 will launch on October 7 on PlayStation 5, Xbox Series, PC (Epic Games Store, Ubisoft Store), PlayStation 4, Xbox One, Amazon Luna, and Google Stadia. The season pass costs 40 dollars, or you can get it by buying the Gold Edition of FC6 for 100. 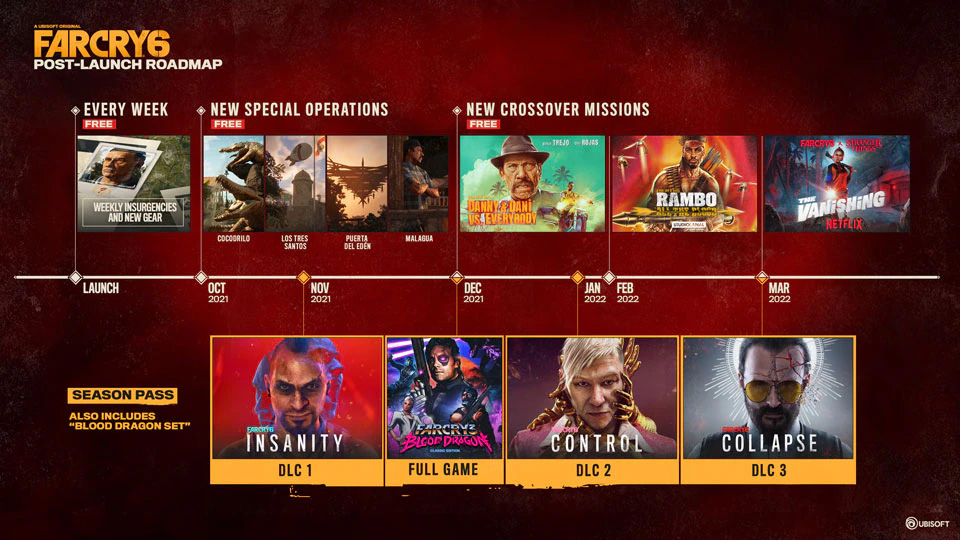