Resident Evil: Welcome to Raccoon City – This Makes You Want Back the Milla Jovovich Movies MOVIE REVIEW – You can pack it into five tons of fan service; a bad movie is still a bad movie. We found this out again while watching the strictly ZS category “creation” Resident Evil: Welcome to Raccoon City, during which we seriously wanted back the better Paul W.S. Anderson and Milla Jovovich movies.

Popular genre franchises never really die; they’re always ready to rise from the grave in mutated, modernised form. Such is the case with Capcom’s zombie video game adaptations. After six feature films starring Milla Jovovich (most of them directed by her husband Paul W.S. Anderson), the dead rise again on the big screen with The Hive – Raccoon City Strikes Back. So Milla is no more, but the makers have promised fans that this new film will be the most faithful adaptation of the interactive source material. Sadly, even though writer-director Johannes Roberts tries to please fans with plenty of fan service, it lacks a coherent plot and genuine scares like zombies lack intelligence. Add to that the shoddy CGI effects, and can safely say, that sadly this Resident Evil movie is dead. 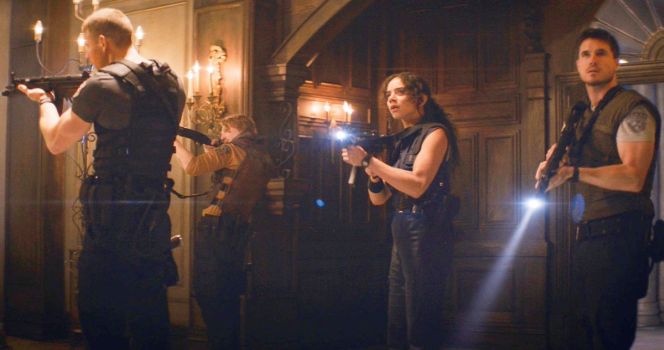 Combining the characters and locations of the first two titles in the Capcom series, Resident Evil: Welcome to Raccoon City opens with a flashback to the youthful experiences of sisters Claire and Chris Redfield in an orphanage run by the Umbrella Corporation. This evil Big Pharma conglomerate rules the small Midwestern town of Raccoon City. This prologue recurs in the rest of Roberts’ story from time to time. It plays an essential role in introducing an evil scientist, William Birkin (Neal McDonough), creating a future deus ex machina, and alluding to Claire’s traumatic ordeal, which never explains anything adequately. This kind of sloppiness is typical of the film, for example, when it constantly throws the adult Chris (Robbie Amell) into a hopeless frenzy of zombie frenzy, only to magically put him out of danger with cheap cuts. Set during a “biohazard” night in 1998, The Hive – Raccoon City Returns follows the intertwined fates of Chris and his sister Claire (Kaya Scodelario), who returns to Raccoon City because a chatroom companion claims that the Umbrella is up to no good. This turns out to be accurate, and it isn’t long before she is reunited with her estranged Chris (who has stayed in their hometown) and then soon breaks up with him again. Soon after, Chris and his tactical commando buddies – tough Jill Valentine (Hannah John-Kamen), brash Albert Wesker (Tom Hopper) and nondescript Richard Aiken (Chad Rook) – head to the Spencer mansion to search for their missing Bravo teammates.

While investigating the haunted mansion, Claire partners with rookie cop Leon S. Kennedy (Avan Jogia) and Chief of Police Brian Irons (Donal Logue), whom Logue embodies as a perpetually bellowing cliché. This team doesn’t have half the charisma of Jovovich alone, though Roberts’ script barely bothers to give them at least an ounce of character in their defence. Mix the first two Resident Evils, and this is what you get

Players will quickly realise that Roberts’ two-strand narrative combines Resident Evil (Chris’s mission) and Resident Evil 2 (Claire’s strand). Plenty of other bits and pieces are sprinkled in to please die-hard fans, such as the start with the truck driver and the hamburger, the appearance of a Titan, underground labs and secret passageways accessed by solving puzzles, and slow-moving zombies that suddenly pounce on would-be victims. However, the superficial authenticity cannot compensate for the lack of nerve-wracking tension – something the player has experienced in abundance in the Capcom games. Roberts’s jump scares are amateurish at best. He and cinematographer Maxime Alexandre conjure up only one unnerving sight: that of a toddler and a mother with the same eerily vacant stare and rapidly thinning hair. Even the undead themselves are rampaging around in a boring gang, with contorted, veiny faces, gaping mouths and lots of grunting and screaming.

Roberts is so busy switching between the two storylines that there is no energy to build tension. Yet we get a very clever start, a good scene in which a faulty lighter causes a constant interruption of an approaching, bloodthirsty zombie, but the scene quickly descends into the usual chaotic combat, lest we be startled for a moment.

After several explosions and the betrayal of a member of the team, Chris and Claire join forces to get to safety. Despite this, the stakes of the survival horror Resident Evil: Welcome to Raccoon City are woefully low, as everything remains one-dimensional, whether it’s the origin and purpose of the zombie threat (the T-virus is only tangentially mentioned), Chris and Birkin’s surrogate relationship, Jill’s attraction to Albert, or Raccoon City itself, which we learn nothing about and see almost nothing of, although it would have been interesting to see a real community introduced. Of course, this gross sketchiness is a simplistic story, but the film could have had a decent script.

Do you call this a reboot?

Resident Evil: Welcome to Raccoon City is both a lame reboot and a missed opportunity. All the fan service is for nought if the discredited, amateurish performances, a poorly written script full of lame dialogue, clashing characters and cliché hooks, and a plethora of scare-free, confusing events make it another disappointment for fans of games and horror films alike.

Resident Evil: Welcome to Raccoon City is both a lame reboot and a missed opportunity. All the fan service is for nought if the discredited, amateurish performances, a poorly written script full of lame dialogue, clashing characters and cliché hooks, and a plethora of scare-free, confusing events make it another disappointment for fans of games and horror films alike.