A Russian eSports Team Was Kicked Out Of A DotA 2 Tournament Because Of Z! [VIDEO] According to Ivan “Pure” Moskalenko, it was a random drawing of the now infamous symbol on the minimap, but he was still kicked off the Virtus.pro team regardless.

The entire Virtus.pro team has been disqualified from a qualifying tournament, meaning the eSports team will not be at the ESL One Stockholm Major after Pure drew (and then quickly scribbled over) the symbol made famous by the war against the Ukrainians on the DotA 2 minimap. According to Yahoo, the incident occurred during a break in a semi-final match against Mind Games, and Virtus.pro was present as Outsiders to avoid the ESL’s ban on Russian eSports teams. The letter was visible for a few seconds, but perhaps Pure’s teammates, fearing punishment, quickly reacted.

Pure stressed that there was no political intent behind the letter Z. In the second video below (the first one shows the act itself in the game), he said, “There was a long pause in the game. The guys and I were talking and drawing on the minimap. When we realized what exactly my drawing turned out to be, we tried to cover it up. I didn’t mean to offend anyone. It all happened by accident.” The organizer, BTS (Beyond the Summit), wrote on Twitter, “Outsiders is disqualified from the DPC EEU Tour 2 Regional Playoffs. Mind Games will receive a retroactive forfeit win for their match earlier today. All future matches Outsiders would have played are forfeit as well. We will share an updated schedule soon.”

Pure, who joined Virtus.pro last November, didn’t get off lightly: he was kicked off the team. The team wrote, “The severity of the punishment is shocking. Valve has a history of imposing disciplinary measures, but disqualifying the whole team from a DPC tournament based on a drawing on a minimap by [a] single player sets up a new precedent. Any actions have consequences, whether intentional or not. Virtus.pro has been consistently opposing any cases of inciting hatred in esports. The club terminates [its] contract with Ivan ‘Pure’ Moskalenko for his diminishing actions that led to disqualification from the tournament and caused great harm to our relationship with the worldwide esports society.”

Pure on the recent incident. pic.twitter.com/nv6OU168Yh 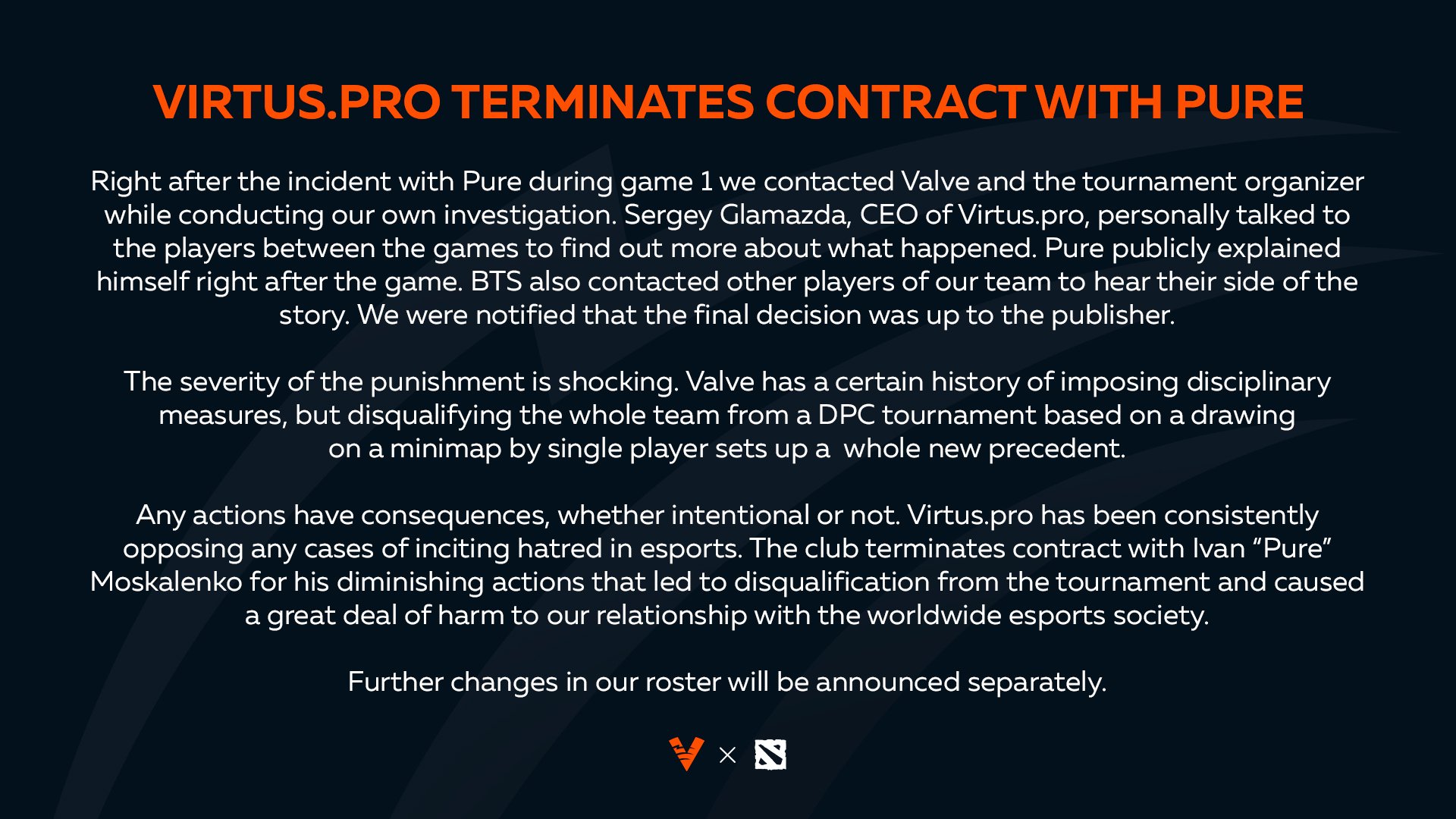