PREVIEW – Mass Effect is back, with a brand new iconic hero Kevin Sorbo.. oh wait this is a different Andromeda. Back to the subject at hand, yes it seems we are finally nearing the release of the latest it seems with all this distancing, they might not fully commit to the idea. All the media footage has barely shown any new alien races, but we have seen some of the old ones.

EA and BIOWARE have been slow on releasing information about Andromeda for awhile now, but since December new footage, and interviews have been pouring out. Will this be the Mass Effect sequel we have been hoping for years? Or should we just continue watching Kevin Sorbo’s adventures?

The game takes place six hundred years after the original trilogy, just enough time to adequately distance the lore from Shepard and the whole Reaper issue. We control either Scott or Sara Ryder, two siblings that are Pathfinders a task force sent to explore planets in the Andromeda Galaxy to find a new home for Humanity. Instead of the Nomad though you’ll have The Tempest at your command, and we now have a vehicle similar to the Mako, but it is now six wheeled all terrain explorer.

Yes, it seems that Andromeda is returning to the good old ideas of Mass Effect 1, where you had to explore the universe, plus an overarching threat was looming over the head of Humanity. At least I’m hoping this is what is going to happen, as currently not much is known about the antagonist, other than a name of the race which is: Kett.

EA and Bioware’s marketing has been odd as while we do know these basic story beats, and what our motivation is. We have barely seen anything coherent regarding narrative as a preview. In fact, the only preview we have seen are small gameplay snippets that while looks pretty do not provide a good enough context for a newcomer, or a fan of the original series. Though at least it will feel like an epic space adventure, and not saving the galaxy from the get go. 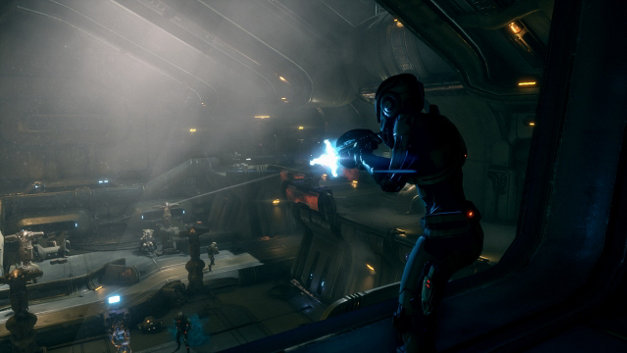 The combat and skill progression seems like a mix of best of both worlds. The developers are providing the player base with a rich skill tree, and class option, but the combat is fast paced, much more mobile. So, in the end, we have Andromeda which is an RPG with really fast combat.

Crafting and resource gather is making a return (let’s just hope we don’t have to send probes everywhere again), as this new galaxy is harsh and humanity will need every resource to survive. We will also have the ability to scan for objects and resources via our suit, and one of the small demos shown online also had a section similar to the old Batman games’ detective mode.

We will be able to switch between classes and reassign points between skill trees fairly easily as clarified by the game designers. Which leaves me questioning if this will have any penalty or can we just do what we want in Mass Effect Andromeda? It is rather interesting to see the developers retain old elements from the first Mass Effect game, all the while trying to streamline it for a new audience.

The graphics of Mass Effect: Andromeda looks stunning, well at least I think it does, because most of the footage shown has a tiny text at the bottom saying: in-game engine representative of final product. This might be okay with DICE, as they can deliver high-quality graphics with their Frostbite Engine, but I’m not too sure if Bioware is also as talented with the engine as DICE.

It looks great, but so does Nvidia’s marketing strategy, so I’m a bit worried that this will not run the best on consoles. On the PlayStation 4 and PS4 Pro, it will run in 1080P and 4k, while Xbox One gets a 900P version. No word about any future possibilities of a Scorpio version but who knows how that hardware will look.

The marketing and the entire game seems to be shrouded in mystery. Not like good Destiny type of mystery, though. It feels like neither EA and Bioware feel the return of an epic space adventure, or they are just too scared to spoil too much from the new entry to this franchise. The problem with this is though that not many people feel enthusiastic about Andromeda and that’s including me.

It looks beautiful but seems too afraid to be truly unique, and the past might tether down the game. Also, lack of marketing or unwillingness to show the game is decreasing the hype. Although it could turn out to be a sleeper hit.

Hopefully, the marketing will kick off this month, as the game releases at the end of March 2017.

– Not much shown of the game
– Graphics are: ”Representative of the Final Product.”
– Story might be bad