PREVIEW – What happens when you mix Don’t Starve and the Orwellian nightmare of 1984? You get We Happy Few, a story about people being on drugs to forget the terrible thing they have done to rid themselves of Nazi invaders. That is the basic premise of the game, which is in store for us next year. The E3 trailer looked fantastic but other than a few scripted sequences not much was revealed. However the developers decided to share a few additional tidbits with the general public, and a gameplay trailer also surfaced which provided a bit more depth for the player.

Still though based on the information here is a collective all in one place preview for We Happy Few, which should give you a bit of idea on whether to take the joy pill or not. 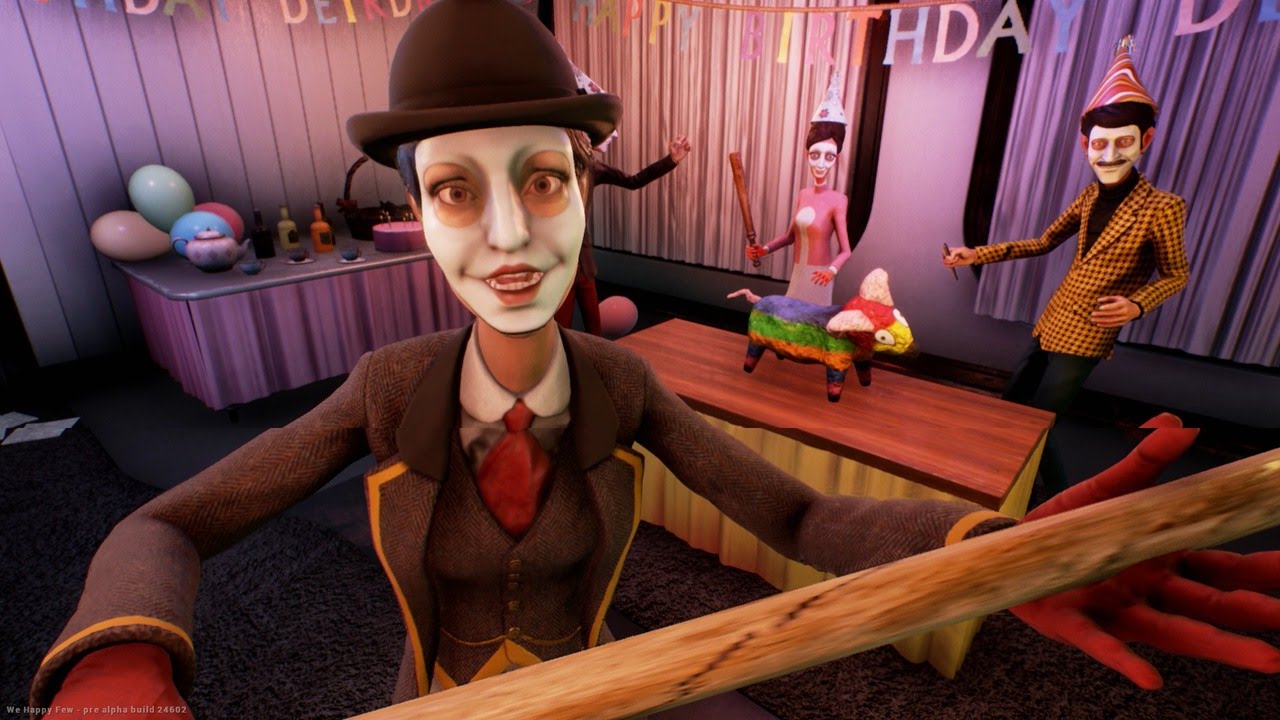 The developers not only took note from 1984 but such works as Brazil (Terry Gilliam’s famous dystopian movie), The Prisoner and A Clockwork Orange. Right off the bat, the intro depicts the main character sobering up from the effects of the drug. The view shifts from the happyish environment to the reality which is rather grim in most cases, such as the part where a pinata turns out to be the corpse of a rat. Fun times indeed, though it was scripted story elements the developers confirmed that the game is mostly crafted out of randomly generated assets such as the main location of the game aka. Wellington Wells. Plus according to the developers you will not be able to discover everything on your first playthrough:

“It will always be very different because the specific encounters will vary as well,” Sears added. “Sometimes, you might have a playthrough where you learn all about hallucinogenics and create weapons and tools [around that]. … And in another playthrough [and] you never even get that recipe.”

The truth behind the pills, the world, and its history can be uncovered, but it will take some time as it will need to be completed by all three characters. Furthermore, the game is extremely difficult, while in the demo we only lost a few items, and restarted in a safe house, in the full game we will have to start from the beginning. No guns in the UK

While the game is predominantly about surviving in a weird post-apocalyptic town, we don’t get to craft weapons of mass destruction. Based on the gameplay trailer we will have to watch out for multiple things for our character such as Food, Tiredness, Health and Stamina. All of these can be refilled via certain ways, but can also be rather quickly lost as the game deals punishment out harshly.

The main enemies of the game are the Bobbies, smiling cops that will beat the hell out of the player if the townsfolk figure out that you are not on Joy Pills, or if you steal too much. The combat will be based mainly around melee, as the developers have stated that a quest will reveal why there aren’t any guns in this place. Combat looks fluid and responsive, and the joy pills provide an extra layer to the exploration. Using these pills will be necessary for certain places, or near certain people so that you can blend in and not be seen as a „downer”. The exploration is not just there for a simple copy of Minecraft, but the inhabitants of the city will have their backstory.

Not everyone is an evil, crazed zombie hopped up on pills, and even the developers commented on how people are just struggling to get by:

“It’s cool to actually design these encounters that not only tell you about the world, but show that these people still have needs and desires. They’re not just homicidal maniacs,” said Sears. “That’s how you really find out about the world. … When you understand the Very Bad Thing and what they had to do to survive, you sort of understand why they’re taking a drug that makes them forget what happened 15 minutes ago.”

Speaking of killing, it is not required to kill anyone, so that means pacifist runs can be done, but it will be harder to survive in the world of Wellington Wells. The game will keep track of the bodies we drop so it might determine the final ending of each run.

The game besides the E3 trailer is in pre-alpha, but luckily in a month or so the PC users will get a chance for early access. We Happy Few looks stunning, though hopefully the ruined city will have some variation and will not just be a gloom and brown landscape.

We hope the provide more coverage once early access comes out, and a full review once released next year on PS4, Xbox One and PC in 2017.

– The atmosphere and city generation becomes dull and gray
– Bad AI, and lack of variation in voiced lines
– Might be a short game?