REVIEW – Insomniac Games never fails to deliver when it comes to wacky games and graphics that push the console to the edge. Ratchet and Clank, the Resistance series, and will release a new Spiderman game next year. However, before they went off to make games for Sony, they had a small detour with Microsoft, and the result of that weird little turn was Sunset Overdrive back in 2014. I finally had a chance to test out the exclusive (since the PS4 has nothing noteworthy for a month or two) and decided to check what the enemy front cooked up two years ago. Is the game good or is it a train wreck from 2014 acting as a 90s kid? Find out here!

The story of Sunset Overdrive is a fun mix of Night of The Living Dead, and a guy going on a Coca-Cola bender for weeks. A company called Fizz decided to create a drink called Overcharge, which it seems did not have enough product testing, as anyone who drinks the fun little orange soda will turn into a raging zombie that has orange juice for blood. You are just a clean up guy who upon the reveal of this fruit, decide to take a run for it, back to your apartment. From that point its a crazy escape sequence, and meeting a bunch of people to aid you in leaving the city.

The story is barebones, but it is presented rather neatly, and the jokes that are blended into it work. It feels like Insomniac tries to the right the ship after the famous Fuse debacle where a wacky concept got turned into a “meh” third-person shooter. We have jokes from Breaking Bad to Day of the Dead jokes, comic book jokes, and in general fourth-walls all over the place. It acknowledges that it is a video game, instead of trying to take itself too seriously.

Fast Travel is done via portable toilets, the guns are nonsensical and are the usual Insomniac trait of wacky arsenals. It is a mix of weird features, but also a commentary on how just grim and unfun some triple AAA games have been for the past years. The E3 trailer sold the game’s basic concept, and levity is the general atmosphere of the title. Nothing is serious besides full small plot points, not even death matters that much in the game. Sunset Overdrive‘s traversal is weird, while some games have vehicles, other games might opt for some super power quick running, in Sunset Overdrive our character only grinds, jumps, and “foot skates” on buildings. This way of traversal is not just for show, but it also allows us to build up our combos so that upgrades can be activated. The movement and the controls are great, but it does take some time to get used to them.

Also deciding when to boost, or to aim during combat is a huge factor to vanquish enemies swiftly. If you just keep going around without experimenting with the movement, you will be bored. A lot of insane stunts can be made, and thanks to the weapon design the levels are not in explosions, and massive orange blood, or special effects when we reach a certain Combo level. The combat is reflective of our style, and how good we do, as individual abilities open up the better we traverse the map. 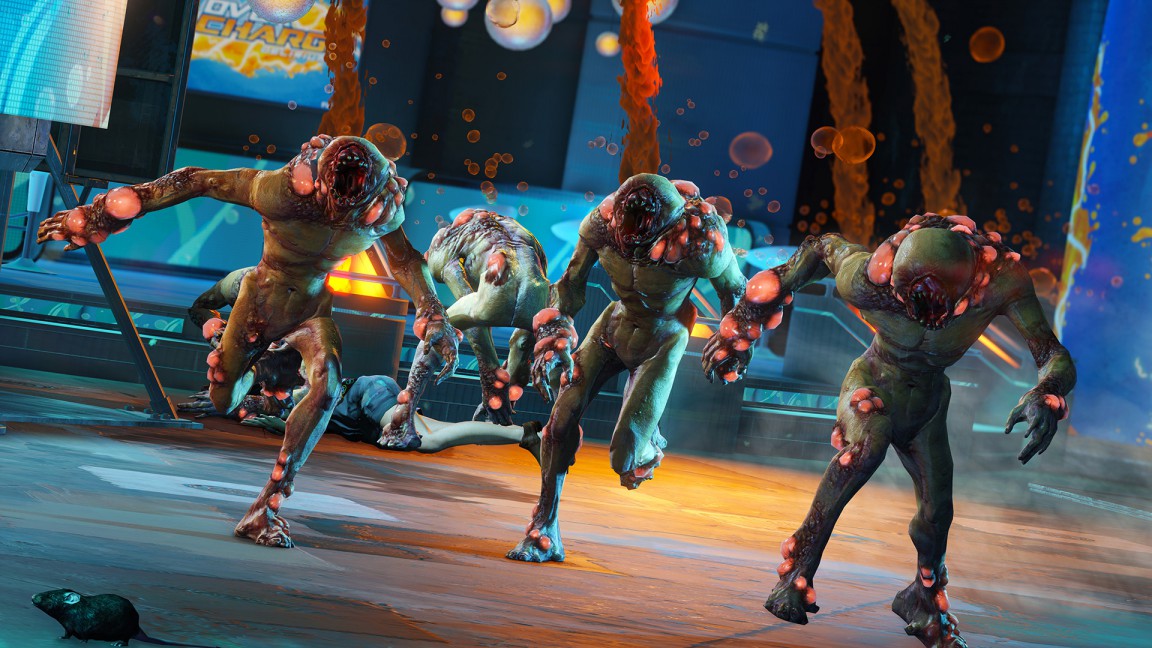 Speaking of combat, while the game does not penalize the player for dying in the game, it still forces the player to be better and try out new stuff. Enemies have particular weaknesses so just spamming the grenade launcher is never a good idea. While it is easy to kill enemies, this can only be done if you are fast and agile enough. Stay in one place for a couple of seconds, and you’ll be torn to shreds by zombies, or bandits.

Our character can be upgraded in two ways: Amps and Overdrives. Amps are special abilities for the player, such as exploding melee swings, lightning than can be called down, and more air time while jumping. There are five types of Amps within the game: Melee Amp, Dive Bomb Amp, Hero Amps, Epic Amp, and Weapon amps.

Melee Amps: adds a unique ability to the melee swing (such as an explosion, or throwing a fireball if an individual style is reached).

Dive Bomb Amps: allows the player to cause more havoc when using the dive bomb attack on the ground.

Hero Amps: Provide unique benefit for the player such as just shrugging off a melee attack, or allowing for higher jumps

Epic Amps: The ultimate benefit, does mass destruction against the enemy.

Weapons Amps: Allows you to equip stun rounds or explosive rounds for your weapons

Then we have Overdrives which are passive bonuses, these are always active and require no style meter to be effective. There are three types of Overdrives in Sunset Overdrive:

Combat Overdrive: Provides benefits against certain enemies, and also buffs, ammo type, and allows some weapons to do more damage.

Hero Overdrive: Provides increased damage resistance in some cases, but also can determine the effectiveness of elemental attacks, and health regeneration

Style Overdrive: These overdrives allow the accumulation of style much quicker, allowing the player to pull off crazy feats much faster. A Hobo jacket and a pirate hat

Holy damn did Insomniac went all out with this one. While GTA 5 might have some funny bits with customization of character, Sunset Overdrive is the best in its genre. It allows you to create the wackiest character you can imagine. My character had a hobo jacket, iron boots, and a fighter pilot helmet as a hat. It all carries onto the cutscenes, and the player can change it any time it wants to.

Probably one of the best parts of the game, since I can make my craziest characters in a video game ever. There’s a treat in this product for everyone, and if you do not like being crazy, well you can just dress your character as a college student to fit in with the ordinary people … if that suits you. 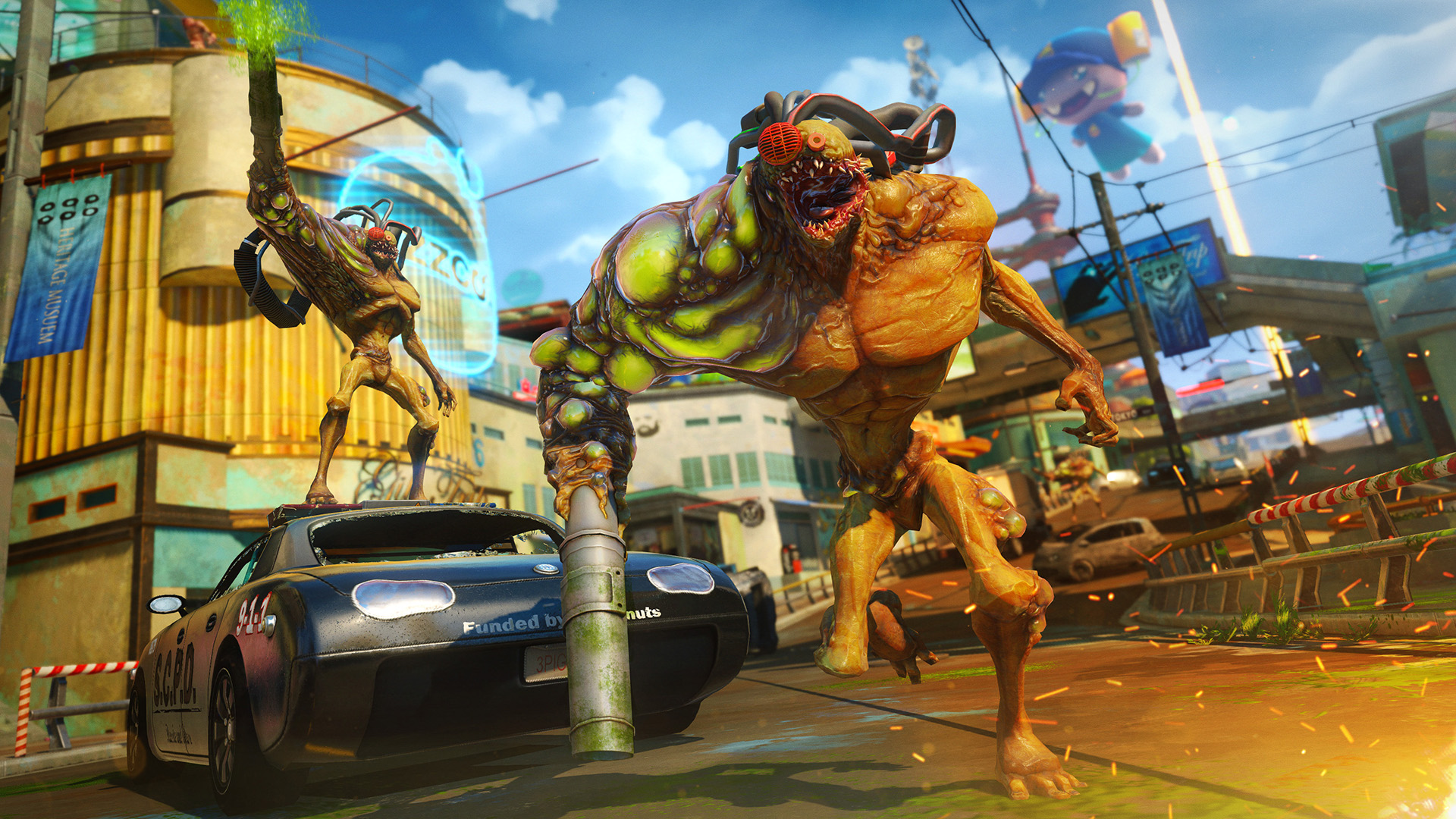 There be trouble ahead

Sunset Overdrive does have its problems, unfortunately. The graphics and style are excellent, but the draw distance is not that great. The voice acting is mediocre to okay. The controls will take some time to getting used to, as aiming while grinding on rails is not the easiest thing to do (thank god for auto-aim). Some of the skills could have been unlocked in the beginning as without them in the first part of the story it is a pain to move around. However, mileage may vary, as while I enjoyed the game up until the end, some people may not as it can get a bit repetitive.

The multiplayer is pretty much dead though so it was a shame we had no opportunity to play the chaos mode. There is also a lack of a co-op mode which is a shame since the game practically begs for it to be played with a second player.

Still, it is nothing horrible or generic, but a little bit of polish would have been great.

Sunset Overdrive is an actual exclusive; it is a new IP, that tries to do something entirely new. Some may like it, but personally I love it.

It does have its faults, but maybe with a sequel that has local Co-op could do better than the first game. As the title is pretty much bargain bin by now, it is a must have for Xbox gamers.

REVIEW - Insomniac Games never fails to deliver when it comes to wacky games and graphics that push the console to the edge. Ratchet and Clank, the Resistance series, and will release a new Spiderman game next year. However, before they went off to make games for Sony, they had a small detour with Microsoft, and the result of that weird little turn was Sunset Overdrive back in 2014. I finally had a chance to test out the exclusive (since the PS4 has nothing noteworthy for a month or two) and decided to check what the enemy front cooked up…
Sunset Overdrive – Smells Like Orange Zombies
Sunset Overdrive – Smells Like Orange Zombies
Dante
Interesting mechanics, with fun and chaotic combat, but the lack of a local co-op and dead multiplayer hurts it.

Interesting mechanics, with fun and chaotic combat, but the lack of a local co-op and dead multiplayer hurts it.