REVIEW – If we get a sports game, Monster Energy Supercross each year, then either the developer could avoid more serious development efforts, or they could rack up a ton of cash with the licences, and the sales from the fans. Milestone is in this category, as I don’t see how it improved that much from last year’s instalment.

We’re talking about the new American supercross championship game adaptation – it feels like it’s going to be an annual sports game. 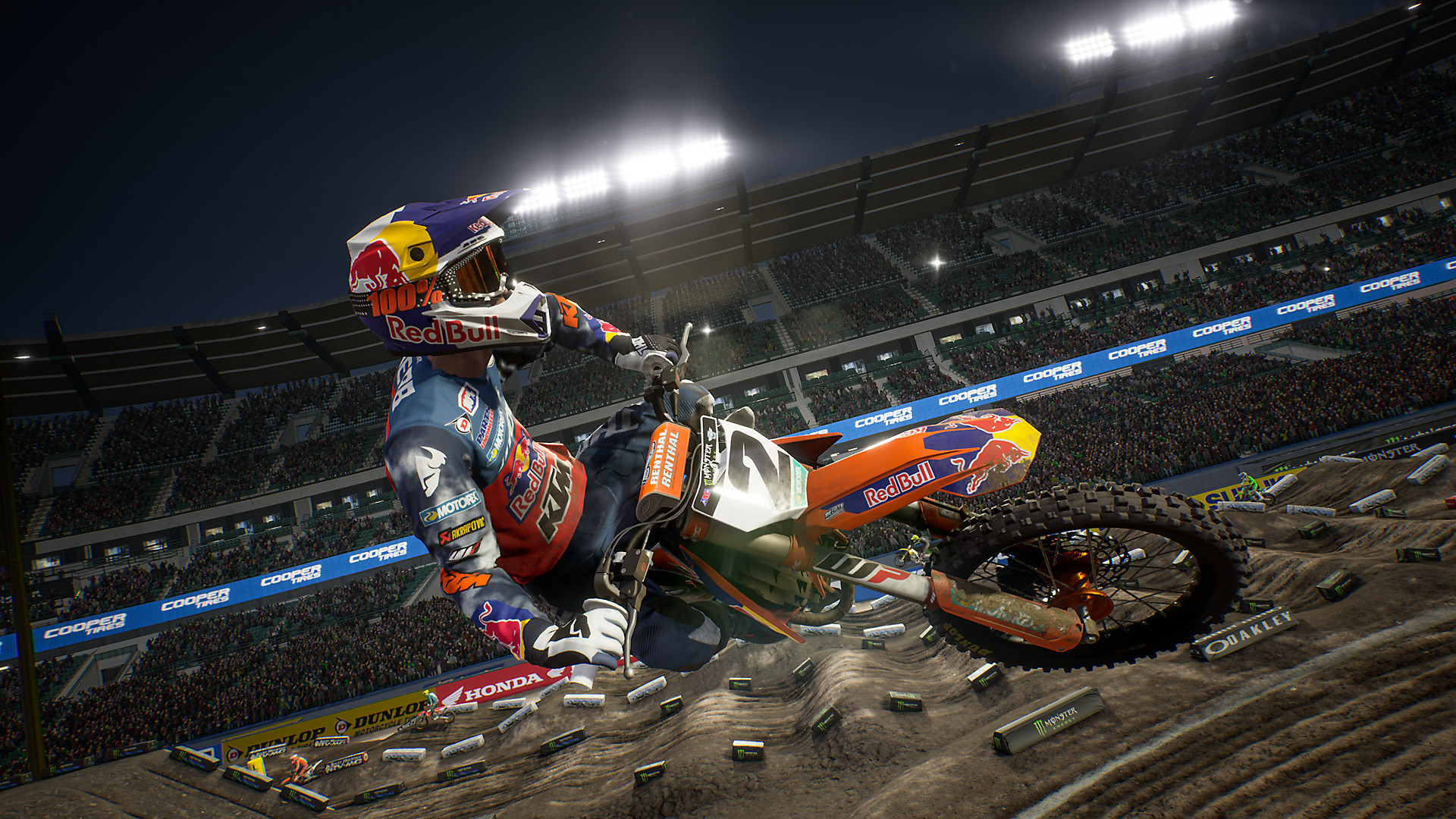 Let’s start by me saying that I’m not going to write the complete name of the game, Monster Energy Supercross – The Official Videogame 3 every time until the end, so I’ll just write MES3. So MES3 starts the same way as many of Milestone’s titles: by creating a character. With presets. Again. Oh, but you can make a female rider as well, and then you can put earrings, or tattoos on your neck, throat, or face, but these might cost you credits that you’ll need to get by racing. The idea is good, but the execution limits you. I say it every year: the character creation is weak, and it needs improvement, but all to no avail: Milestone doesn’t do anything.

„The gameplay is still extremely difficult for those who are not into motocross in general. The track’s usage will be shown over time with the tracks showing up in the dirt/mud, and you will have to choose the right line, plus, and this is the most important: you will have to learn to navigate the small hills. You must find your rhythm while positioning your bike and rider right, as it’s not a speedy solution if you jump from a hill to the uphill part of another one. The physics seem alright, but – as I previously said before – you must learn the genre the hard way.” I wrote this last year with Monster Energy Supercross – The Official Videogame 2. It still applies even this year. (I intentionally took a look at what I said a year ago: with an annual series, the best way to compare is by looking at what last year’s game offered…) Yes, you get a tutorial race, but the game will not hold your hand. You have to find the braking points. You have to find the right rhythm at the bumpy portions of the circuits by shifting your weight forward or backwards or by scrubbing in the air to minimise your time spent in the air, usually sideways. Apparently, they improved it, and it can be noticed.

Regarding physics, I felt that Milestone improved it. You can no longer get through the jumps and bumps by going full acceleration, as often you will find yourself falling, but thankfully, there are unlimited rewinds, so there’s no such thing that the artificial intelligence ignores your presence, bumping you off into a trackside advertisement block, dropping you to the last place. So yes, you have to learn here, but the improvements can be seen: as the laps go by, you’ll find the lines used by the grid, the right pacing will improve your lap times, and eventually, you’ll start thrashing your opponents in the three categories (250cc West, 250cc East, 450cc – you need to win a 250cc title to access 450cc). 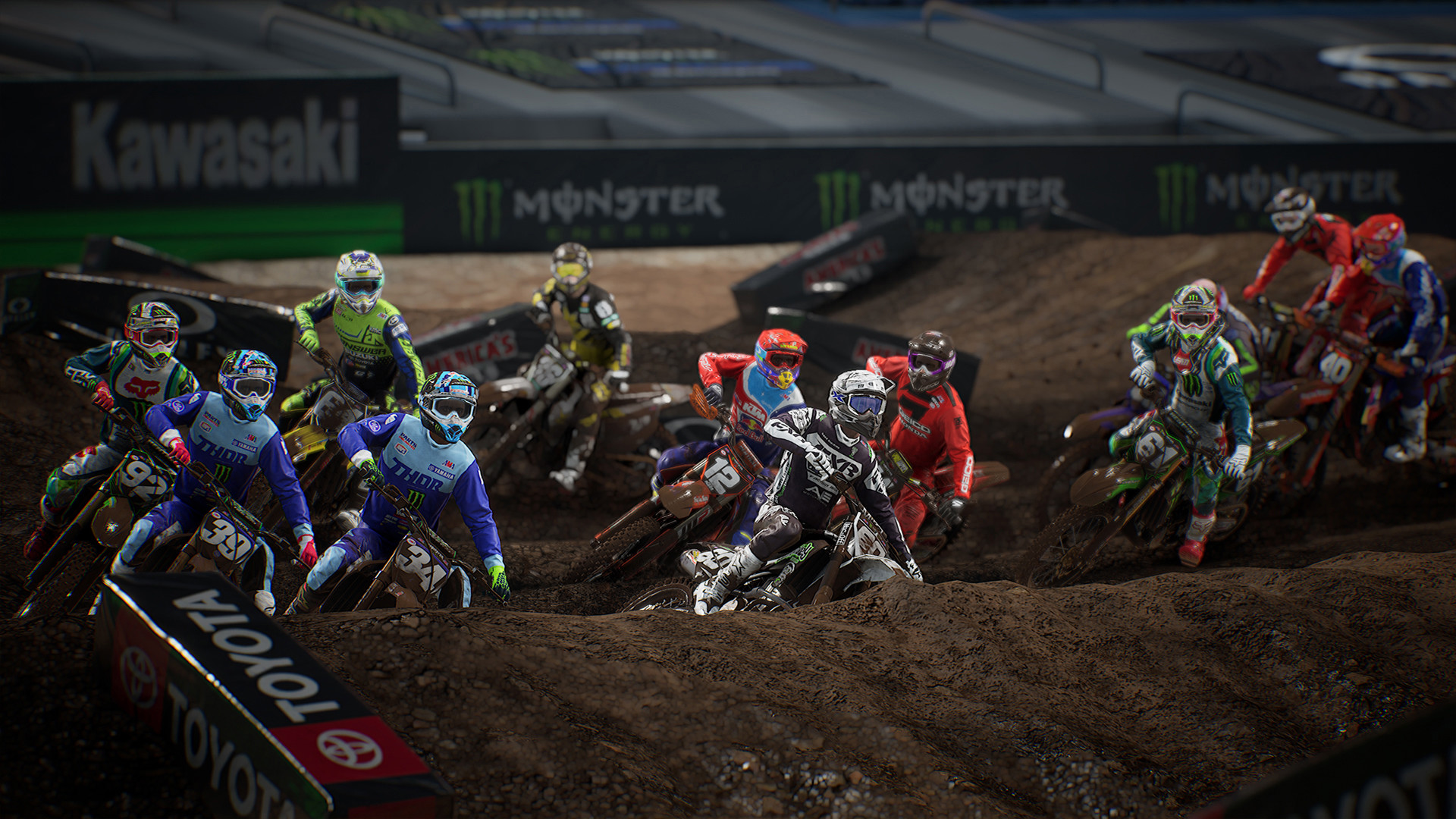 After creating your character, your career starts with a race in a boot camp (not in a stadium) and depending on your performance, you can choose whether you want to be an independent rider with sponsorship, or, for the first time in the series, join an official team. The main difference between the two would be the amount of customization that you can perform on your bike: with an official team, your hands are tied, but being independent will give you more freedom. All the teams and riders are here from the 2019 season, and while I have no problems with how the bikes look, the riders look quite awful, and I think I have said this with our custom rider before. We go from race to race, and if we get the most points by the end of the year, we win.

The presence of the track editor is good (but seeing how I wrote about this before the game even launches, it’s hard to have a detailed opinion!), and the Compound now offers cooperative riding, too. The multiplayer also received a significant overhaul. There are public and private races, and on dedicated servers (so not peer-to-peer, although not everywhere, I’ll get back to it in the usual negatives part of my thoughts), so going from a Standard Race through Checkpoint Races, you can even do even Championships online, and the customisation comes with you, too. How much time until it dies, though? If the 2021 game comes (because knowing Milestone, they will do a MES4…), the fans will immediately flock from 3. And then the whole thing will be dead, and that makes me worried. 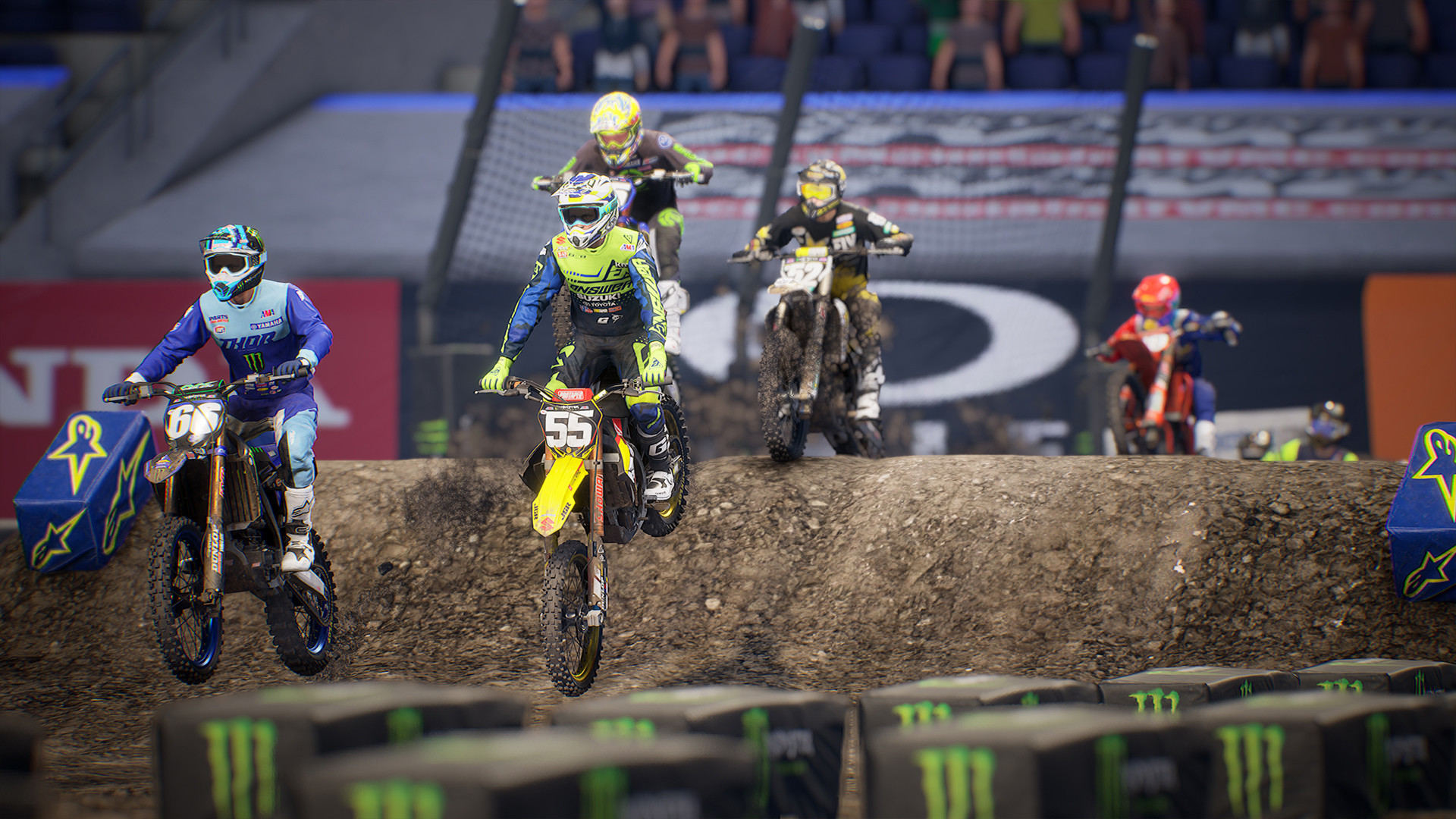 I’ll say it upfront: MES3 isn’t getting as good of a score as MES2 did. Don’t tell me that Milestone can only add functions to the game by taking away other functions elsewhere! Let’s start from the beginning: your character will look terrible, you can’t make a completely unique male/female rider, as you have to race to get points, credits to unlock customisation. At least there are no microtransactions, and let me look at Steam to see if they have DLC already, and… Oh, „Planned Release Date: 4 February,” meaning the embargo will be lifted four days before the game is available. Interesting. There is no DLC, but they might add it after I’m done writing this.
So the game doesn’t give you a proper tutorial. You, being thrown into a race is not a tutorial – it’s you in deep water, with the controls always shown on the right side of the screen. The other parts of the tutorial are text only (not even commentated!), such as the description of a championship. I believe this is a licensed game, so beginners should get more help than this. This is just bad.

Then you can see the HUD each race, which isn’t that bad, aside from the bottom right corner. I think the number that shows which gear you are in is too big. It’s mostly clean, yes, but THAT thing in the corner looks awful. Also, let me get back to these dedicated servers: if you want to play this game on the Nintendo Switch, prepare to be disappointed – no such thing on Switch! Also, in MES2, there was a part in the career where you could plan your weeks to do what you want. Training? Nah, why would you need training? Challenging another rider? Forget about it. Improving your fame with media days? Nothing whatsoever. The difficulty levels are still hard-coded, with no percentages available. So in other words, the career mode outside races has been extremely cut back, even though it was something I liked in MES2.

I’m so getting sick of Milestone doing the same thing with MotoGP. Sure, there are some challenges under the single player menu, but I’d prefer a more polished career mode, thank you. Giving a thing here, and taking away something else there is no evolution. It’s just you standing still each year. I think the game even got rid of celebratory moves as well when the race ends. Do you fall off the bike? You still teleport back onto it. The same goes for the AI. Did you accidentally take the hairpin too tightly, cutting the corner? Ah fam, you get teleported back to the start of the corner. Time penalty? Naaaah, why do that? At least you can farm the style points this way…

So I’m tired of Milestone going minimalistic here as well. Last year, I ended with a seven out of ten because of the Compound, but this year, Monster Energy Supercross – The Official Videogame 3 won’t get a 7. It gets a 6.5, and fans can consider it as a 7.5. The extras menu point already has the DLC option there (plus the credits), and while the soundtrack is solid in the game (it’s not some soda rock but licensed music, but sadly, the game doesn’t say what music is being played…), the ambience and the gameplay doesn’t entirely take the game to a new level. The fans will like it, but I can’t recommend it. Get Monster Energy Supercross – The Official Videogame 2 instead.

REVIEW - If we get a sports game, Monster Energy Supercross each year, then either the developer could avoid more serious development efforts, or they could rack up a ton of cash with the licences, and the sales from the fans. Milestone is in this category, as I don't see how it improved that much from last year's instalment.   We're talking about the new American supercross championship game adaptation - it feels like it's going to be an annual sports game. Feminine line Let's start by me saying that I'm not going to write the complete name of the…
Monster Energy Supercross – The Official Videogame 3 – Annual Mudslinging
Monster Energy Supercross – The Official Videogame 3 – Annual Mudslinging
V
Is the series going downhill?

Is the series going downhill?

User Rating: Be the first one !
Spread the love
Tweet
Tagged milestoneMonster Energy Supercross - The Official Videogame 3 REVIEWPCPlayStation 4Xbox One