MOVIE PREVIEW – What can we expect from Prey, the latest installment in the Predator franchise, available on Hulu and Disney Plus? The now-official trailer reveals a few things about the “indie” Predator movie, so we’ve rounded up a bunch of other information to give you an idea of what to expect when Prey is out.

The ’80s are synonymous with big action movies. A handful of them stand out from the higher-concept films, not just a bunch of chunky, fully-armed guys blowing stuff up. These include Terminator, Aliens and the alien-hunting classic Predator. After so many weak sequels, can we finally expect a good movie?

Predator is one of the defining films of the decade and of the action genre. It was full of the epic confrontations, brutal weapons and muscle-bound, macho bad guys you’d expect from the era. And it starred the action hero icon of the era, Arnold Schwarzenegger. It also perfectly blends the action, sci-fi and horror genres into one seamless jungle brawl. In Predator, we heard the classic Arnold line, “If it bleeds, we can kill it…”. And that’s exactly what the studio did; it almost bled the franchise dry with all that foxhide and almost killed it.

Because Predator didn’t get away with making more and more sequels. Some of them are solid (Predator 2, Predators), some of them should have just been left in sketch form (AVP, AVP Requiem and The Predator). But the basic concept has endless potential, no matter how many skulls Predator has amassed.

Now Hulu is tapping into that potential with a new Predator prequel series, Prey. The film promises to be a very different Predator movie. The filmmakers seem to be shifting perspectives and approaches, going for a more down-to-earth and understated story as opposed to the big explosions and macho heroes of previous Predator films. The former approach worked in the 1980s, but perhaps it’s time for the franchise to stop living in the past.

Stepping back several sequels, Predator 2 established that the titular alien race has been making hunting trips to Earth for centuries. Yes, that means Predator era pieces. Prey takes place roughly 300 years before the events of the original Predator. The hunters in this film become an Indian Comanche warrior and his entire tribe. Here’s the official synopsis of the story:

“Prey is the story of a young woman, Naru, who is a fierce and highly skilled warrior. Raised in the shadow of the legendary hunters of the Great Plains, when danger threatens her camp, she sets out to protect her people. The prey he stalks and eventually confronts turns out to be a highly evolved alien predator with a technically advanced arsenal, resulting in a brutal and terrifying showdown between the two opponents.”

The first teaser trailer, which shows almost nothing, was released back in May. We got a chase in the woods and an Indian warrior pulling back an arrow aimed at an unseen enemy. Then comes the distinctive three red dots on the Predator’s shoulder weapon sight, and the disembodied rattling breaths that echoed through jungle and concrete jungle alike.

And the new trailer, officially out yesterday, can be found at the bottom of this article.

The film will revolve around Naru (Amber Midthunder), an elite warrior woman of the Comanche nation who must defend her home and tribe against the invading Predator. This is in line with the concept of Predators using the land as hunting ground, long before the original 1987 Predator saw Dutch Schaefer (Arnold Schwarzenegger) and his companions stalking the hunting ground through a Guatemalan jungle. The cast and crew of Prey are made up almost entirely of indigenous actors. They include Amber Midthunder (The Ice Road, Roswell, New Mexico), Dakota Beavers, Stormee Kipp (Sooyii), Michelle Thrush (The Journey Home) and Julian Black Antelope (Tribal).

The idea for Predator, which roams 18th century North America, came from Prey director Dan Trachtenberg in 2016. Trachtenberg has a thin but solid directorial CV, having helmed episodes of The Boys, Black Mirror, and the excellent 10 Cloverfield Lane. That film is an erudite, claustrophobic thriller set in the wake of a potential alien attack. So Prey offers Trachtenberg familiar ground and a solid foundation on which to build his vision for the Predator prequel. The script was written by the relatively unknown Patrick Aison, who worked on episodes of Jack Ryan and Treadstone. Prey will be the feature film debut for the producer and screenwriter. 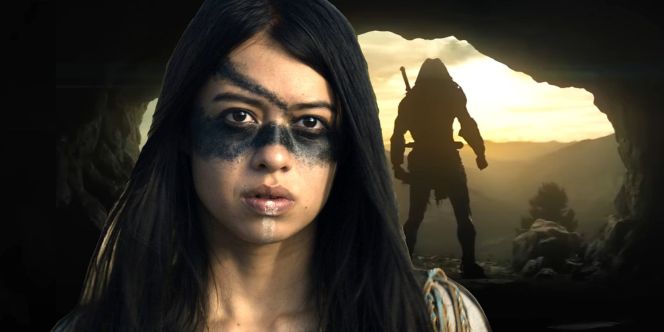 Expect everything and everyone to be authentic

Prey will pay particular attention to accurately portraying Comanche people in the era. The film will be produced in part by Jhane Myers, a member of Comanche Nation, documentary filmmaker and Sundance Fellow. Meyers’ involvement is key to ensuring that the setting of Prey is not just a clichéd and potentially flawed replica of the Comanche Nation of the 1700s. An acclaimed documentary filmmaker, Myers also serves as an advisor and ambassador between the filmmaking and the Comanche and Blackfeet nations. His life’s work revolves around preserving and honouring these tribes through film and other artistic works. In his involvement in the film Prey, the cast was almost entirely made up of indigenous people. Prey director says, “it’s not going to be a Disney Predator.”

The first trailer for the new Predator movie Prey has released what looks set to redefine the franchise and bring something new to the world of alien creatures capable of making themselves invisible. Based on the trailer, the original fears that Disney was trying to dumb down the franchise have been well and indeed allayed, with director Dan Trachtenberg confirming that this Predator will definitely not be family-friendly.

For many, 20th Century Fox’s acquisition of the Walt Disney Company was alarming. It was feared that Disney would then bash the R-rated film franchises to remain a family-friendly company. However, given that Disney already had a hand in some more adult content through its many brands, there was no need to worry that franchises such as Alien or Predator would be turned into children’s stories for younger audiences.

Speaking to ComicBook.com, Trachtenberg said that Disney has never had a problem with Prey containing the gore and horror that the original Arnold Schwarzenegger film did.

“The Disney deal didn’t affect the film at all in terms of content. That’s why I was excited to finally see this trailer come out. And for those who were worried about whether it would be PG-13 or ‘Disney-Made-Predator. This was a 20th Century movie all the way. And Disney has taken the reins in a big way, and now they’re putting it out there for the world to see, but there was never any mandate from them. I was horrified by some of the wording in the script, and when they read it, I thought, “Oh no, are they going to freak out about gory descriptions and stuff?”. But no. It’s a brutal, intense, very not-for-kids movie. And I’m excited to dispel any misconceptions about it.”

The story revolves around the well-known six-foot-tall, deadly and mostly invisible alien who hunts the biggest game for sport and honour with his arsenal of advanced weaponry. The imposing, terrifying alien lands on our planet in Prey, which will be released on Disney Plus in the US and Hulu on 5 August 2022.