Darksiders: Warmastered Edition – War With A New Coat Of Paint 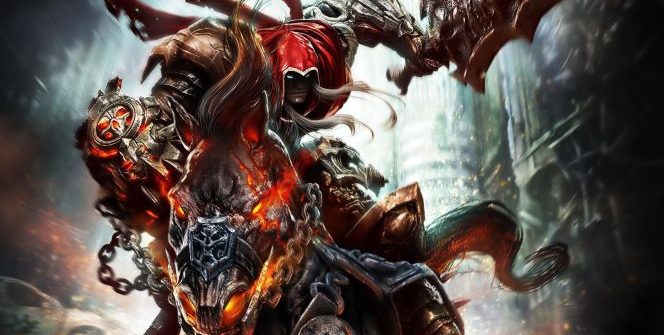 REVIEW – After roughly seven years of the original release, THQ Nordic – who recently flopped a bit with The Dwarves – brought back the first Darksiders game. Since then, THQ went bankrupt (most IPs of the company was bought by Nordic), Vigil Games got disbanded, and we’re waiting for the third episode. Until then, we can play both games on the PS4 – the first one’s update is not bad!

Poor War – despite being one of the Four Horsemen of Apocalypse, he started rampaging on humanity too early, which resulted in his punishment. Of course, our „hero” got into a conspiracy, and he doesn’t want to stay powerless, so he craves for revenge. He’s joined by a demon called Watcher, who will overlook his mission, and with a nod towards Zelda, he also gets back his trusty sword. The plot is typical (although it’s not that big of a deal here): revenge, relearning everything. The Biblical touch on the plot is good, and it’s noticeable elsewhere, too. 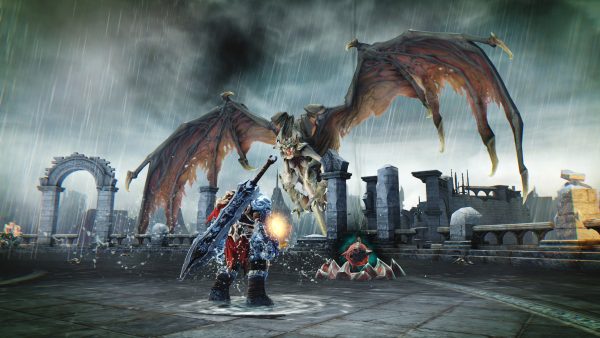 God of War? More like War of War! (Aka War’s War, with a higher speed…)

Darksiders‘ gameplay is not more than a God of War clone, but at the end of 2016, while we’re waiting for a new installment in both franchises, it’s not a large crime as it was in early 2010 on PlayStation 3 in my opinion. The hack ‘n’ slash genre deserves to get a new, decent game, and perhaps the new Darksiders or God of War will fulfill our cravings for something new and excellent. That’s the future, though, we’re far from getting them.

In the lead, I talked about speed. Well, the Warmastered version of the game is running much smoother. The original barely had thirty frames per second on the PlayStation 3 in 720p, but 1080p and (mostly) 60 frames per second can change everything. While a few segments are somewhat difficult, it doesn’t feel as hard as six years ago. Graphically, I think the improvement is decent, and the PlayStation 4 version can pick up a fight with the PC version, although the computers have the upper hand in the end. Look at this comparison; it’s worth checking out the improvements since the original:

Visually, the Warmastered version kept that unique feeling that made the ambiance oh so good in 2010. It looks comical, but not in a bad way. Better shadows, better textures, and due to the higher frame rate, faster action describes Darksiders, almost making it a must-buy… but unfortunately, there are problems, tarnishing the result somewhat. 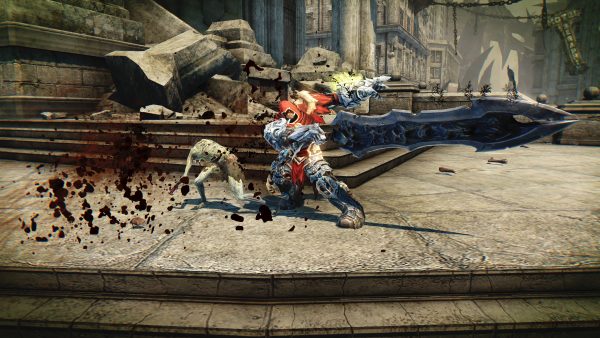 The game isn’t purely just hacking your enemies to ribbons (making the gameplay not THAT boring), as there are puzzles. You’ll create wormholes and travel between dimensions here and there – the latter part reminded me of Legacy of Kain: Soul Reaver for some reason -, and you’ll quickly feel intuitive about what to do where with these puzzles.

I can say the same thing regarding combat: one button, then glory kill (after DOOM, this term stuck in my head), and you will learn more combos and use other weapons later on in the story. I think I played a bit too defensively… but don’t worry, Red Bull gives you ghost wings, allowing you to fly over those lava pits.

There are pits, indeed: the Earth is not that we all got used to in our lives. Joe Madureira’s comic works, mixed with the apocalyptic world’s look result in a great mixture even by today’s standards. During combat, you will get used to the visuals without a doubt.

My voice is delayed

This issue is the biggest with the Warmastered version. The cutscenes audio almost never sync with the animations, delaying left and right all the time. There’s nothing funnier than fighting already while you STILL hear the cutscene audio. Jesus! It happened even with a delay!

Still, Darksiders: Warmastered Edition‘s contents lack compared to the second game, but with its 20 dollar price, it is a reasonable offer. 14-15 hours of gameplay is on the cards, and while it’s a God of War clone, the visuals and the largely improved graphics from the original make it a recommended purchase. (And other publishers could learn from THQ Nordic: those who previously bought the Darksiders franchise for example on PC – it cost me like 7 pounds two years ago -, they got both games’ updated versions for free…)

+ Great graphical improvements and the frame rate looks okay
+ The story and the protagonist isn’t your typical run-of-the-mill ones
+ Great ambiance, mixed with a nice art style

– The audio is out of sync during cutscenes…
– The game can get boring after a while
– It’s still what it was six years ago: a God of War clone…

I made peace with War!