PREVIEW – South Park’s 20th season premieres this September; the show will be the second longest running animated series in the US after The Simpsons. While Simpsons maybe are the longest running, South Park has been able to break into the video game industry with Stick of Truth. Now two years later we get the epic sequel titled Fracture But Whole… oh come on!

The story picks up a few days later after the first game. You as the New Kid – aka Douchebag decides to continue his adventures as the new awesome hero of the town. Sadly, as fads come and go, playing Elves vs. Humans is no longer cool. Instead, everybody is now a Superhero. Cartman is The Coon, Kyle as The Human Kite (oh god), Kenny as Mysterio, and Timmy as a Charles Xavier rip-off. The sequel decided to rip on the superhero genre, and all the big movie deals that have been made in the past.

Eric Cartman’s ambitions to create a movie/series/comic book franchise out of The Coon intellectual property creates a rift between friends, family, and everyone will take sides in order to become the most power… I mean most profitable franchise in the history. The road to reach one billion has begun, and we must take a side. 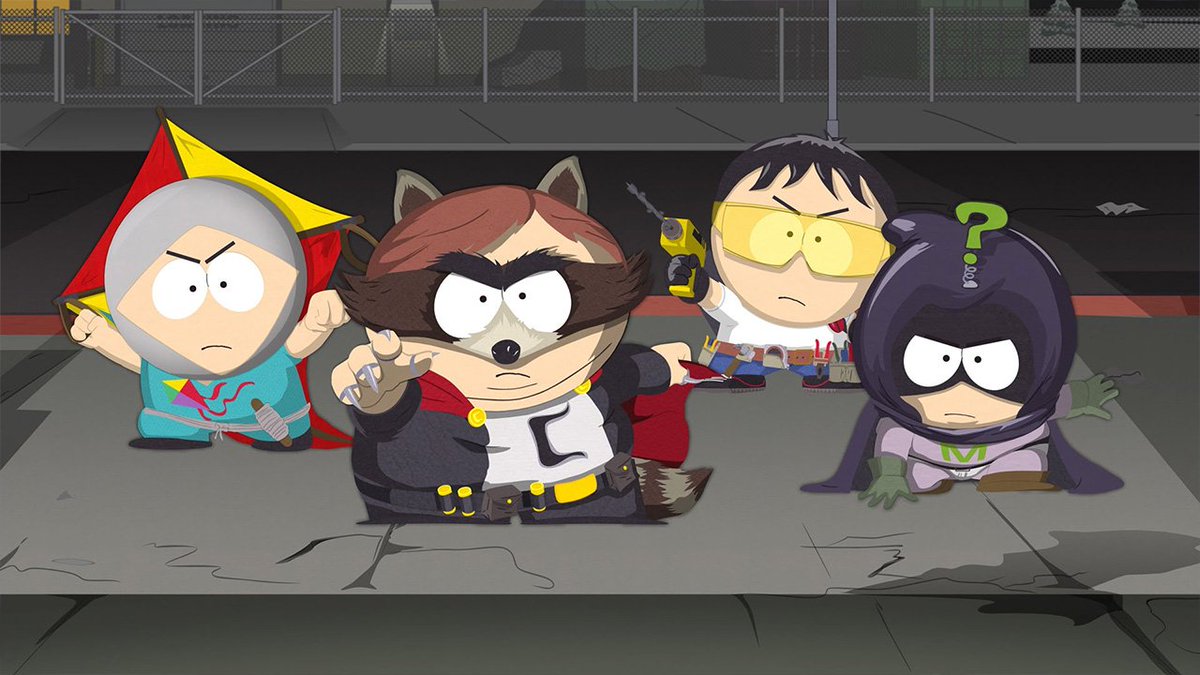 A Battle for The Civil War Box Office

Stick of Truth had a rather conventional combat system, and it was quite similar to the good old Paper Mario. You had your buffs, debuffs, attacks, special attacks, and über assistance. In Fractured But Whole (never going to get tired of this), the combat is made less static by allowing the player to move around within the battlefield, and can position characters to attack multiple enemies. Items, weapons, and armor also seem to be making a return for the sequel.

The big changes are this time the classes, which are Brutalist, Blaster, Speedster, Elementalist, Gadgeteer, Mystic, Cyborg, Psychic, Assasin, Commander, Netherborn, and Karate Kid. All of the classes will have different abilities, weaknesses, and style of clothing. Plus you can also be a girl now which will change how the other NPCs will react to you, and talk to you. The question remains though is how varied the dialogue is between the player character and the different classes the player can pick. Mostly because when the character chooses a class, it can be switched by Cartman in-game anytime (at least the initial implication is). Instead of mana we now can charge up our super ability during the battlefield, and the usual Quick Time Event to do critical damage does return.

There is not much change in the combat, but it seems Matt and Trey decided to add more depth by allowing more choice to the players. Which is great, and this also reflected on the fact that more varied dialogue is provided when certain attacks are done.

The Killing Joke plus more graphics

The sequel does retain its style once again from the cartoon series. Luckily though that does not mean that we get reused assets for the sequel, but rather the effects look more polished, and the character details also look sharper compared to the first game. In the end, though nobody should expect the game to look like Crysis.

The main focus point of the game is jokes, which based on the trailers, and the newly released Gamescom gameplay footage it will hammer the superhero theme to oblivion. It is best left to just watch the trailers and experience those few jokes as they are well written. Though I do hope we will avoid a similar situation where a scene got cut from Stick of Truth because the EU did not like its… content.

Fractured But Whole (AHHAHAHAHA)… uh anyway, the sequel is shaping up to be a better Stick of Truth. Which is something remarkable, since it is going above and beyond the previous game. Hopefully, the story will be just as good, as the basic premise sounds good, I’m not sure if they can stretch it out for an entire game.

Matt and Trey are back, to provide us with the best comedy, and a much-needed bashing on the superhero formula! December 6th can’t come soon enough.

Up up and away: